Young hockey fans sang their hearts out before, during and after the Ladies World Cup Hockey Final which they watched on television at the Glenside Pub, Churchtown near the Loreto Hockey Club in Dublin. Video: Ronan McGreevy 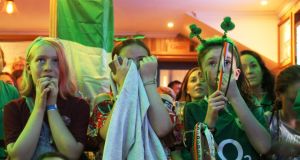 Like London buses you wait ages for a big hockey match – and then two come along at once.

Just 24 hours after gathering for a Hockey World Cup semi-final match against Spain which was replete with tension and eventually joy for Ireland, a huge crowd gathered in the Glenside Pub in Churchtown for the final which, from an Irish perspective, was devoid of both those emotions.

The pub is the local for members of the Loreto Hockey Club in Rathfarnham. The Loreto club is one of the few all-female hockey clubs in the capital, and three of its members are in the Irish squad - Ali Meeke, Hannah Matthews and Nikki Daly.

There was standing room only for Saturday’s semi-final, but there was not even that for the final, with many of the children present sitting on the floor, staring up the big screen.

They lustily sang Ireland’s Call, the anthem and a reminder that it is not just the rugby team which has an all-Ireland dimension – but that is as good as it got.

Once the first Dutch goal went in, the tension left the capacity room and the procession of Dutch goals followed.

By the time the third quarter rolled around the crowd were cheering every block and goal line clearance, as many feared Ireland would suffer the fate of Italy – who lost by double scores against the same opponents.

That never transpired as Ireland put in a redoubtable defensive display in the last quarter, and the Dutch dropped the intensity of their play.

Some of the younger members of the audience returned to their mobile phones. A few spread out colouring pencils on the ground and started to scribble.

With the final result never in doubt, the crowd broke into The Fields of Athenry, along with a few chants of a soccer anthem from a bygone World Cup – Olé, Olé, Olé.

The dominant emotion was pride, especially when the club’s three squad members appeared on the big screen to receive their silver medals.

“We’re so proud of them,” said Loreto club captain Edel Maxwell. The club have 500 junior members and a lot of them were present for what is a rare spectacle – a prime time television audience for a hockey match.

“This will do Irish hockey the power of good. People have gone to great efforts. They have cut holidays short, they have come early to be here and to soak this up. We are so proud of our three girls from Loreto and the whole team,” she said.

Most of the Irish sporting public have been day trippers in the hockey world this week. Next week, Irish women’s hockey will be back competing with the All-Irelands, Premier League football and rugby for attention.

Still, in this glorious Irish summer, nobody can deny that Irish women’s hockey has had its day in the sun.

The team will have another day out on Monday when they are due for a reception in City Hall at 2pm, followed by a parade down Dame Street.

Who is Caelan Doris? Meet Ireland’s newest rugby international 15:55
James McClean: ‘if you ask my family they’d prefer Bosnia away’ 15:22
Sene Naoupu: ‘I believe we’re on the verge of something special this season’ 15:00
Catalan Dragons slammed for signing Israel Folau 14:00
Christian Eriksen seals move from Tottenham to Inter Milan 13:38
Here is your handy guide to sport on television this week