Ireland women determined their success will create a legacy

‘We want to increase the profile of our sport in any way possible,’ says Graham Shaw 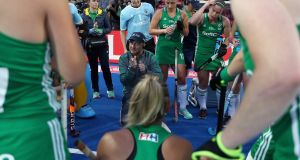 Ireland manager Graham Shaw talks to his players during the Pool B game against England at the FIH Womens Hockey World Cup at Lee Valley Hockey and Tennis Centre in London, England. Photo: Christopher Lee/Getty Images

The Irish women’s team are hopeful their performances at the Hockey World Cup this week can provide inspiration and a lasting legacy for a sport that rarely tips the media scales.

A couple of years back, a Hockey Ireland working group described the game as an “underground movement” with little traction in the mainstream. Part of the market research profiling involved described stakeholders as “conservative” by nature, modest and unassuming.

In that context, Irish coach Graham Shaw and his cohorts are keen they do not let this opportunity slip them by, to tell the Irish public the sport is out there. And they plan to do it smiling all the way.

It follows unprecedented media coverage for the sport, appearing on front and back pages of all the papers and hitting new radio and television audiences. It started with the shock 3-1 win over the US, beating the world number seven with something to spare.

A 1-0 success against India confirmed top spot in the group and a direct passage to the quarter-finals despite a 1-0 loss to England on Sunday evening.

Any sense the side will try and tone down the volume of media duties ahead of their quarter-final on Thursday against either India or Italy was dismissed by Shaw.

He recognises this is a golden chance for the Green Army to have a lasting impact for hockey.

“It’s what we have aimed to do since we started playing international hockey,” Shaw said. “The girls set out to create a legacy, to inspire young players to play our sport.

“We just hope that a few people back home who have maybe not seen or played our sport before will pick up a stick and get involved.

“And for those who have played already, hopefully we can inspire them to work incredibly hard and commit their lives to become an international hockey player. We want to increase the profile of our sport in any way possible.”

A big plus for the side is their lack of any formal media training in marked contrast to rival nations with bland post-match patter, getting a platform to tell their stories.

And they have purposefully done so with a smile on their faces with the ever-present repetition of how they are enjoying every moment. It is evident from their run-out onto the pitch from the tunnel and during the anthems, the grins beaming out onto the big screens in Lee Valley.

“Our motto is just ‘enjoy the tournament’,” two-goal hero Deirdre Duke told The Irish Times after the 3-1 win against USA. “If you can’t enjoy a moment like that, your national anthem with all your friends and family there, what’s the point?”

After the 1-0 loss to England, Ali Meeke added: “the mood was superb in the locker room. What an experience to play in a stadium of over 10,000 against the hosts. We just enjoy every single moment of it. It allows us to play without fear and the mood is very high.”

And Shaw is keen that upbeat outlook continues.

“Nothing changes because we have made a quarter-final. We’ll smile, enjoy it, prepare as best as we possibly can and continue to give people our time because it is important to us. It is important that we get it out there into the Irish community and inspire the next generation and will do anything we can do to help that.”

They find out their quarter-final opponent on Tuesday evening when India and Italy meet in a crossover game at 8pm.

Either opponent would provide a winnable game and skipper Katie Mullan said it is the perfect situation, avoiding all the remaining sides in the world’s top six.

“If you offered that to me beforehand, I’d have taken that and ran away as far as I could with it!”