Hockey reaps the rich rewards of Shaw’s loss to soccer 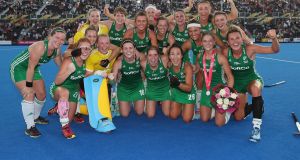 Each morning in their hotel Graham Shaw gathers the Irish hockey staff and they head out for a run around London.

It’s not that long ago that the 39-year-old coach of the Irish women’s team was a player himself with Glenanne, the Tallaght-based club he grew up with, playing across town with Monkstown, as a professional with Dragons in Belgium, and with the Irish team.

“He’s trying to keep himself mentally sharp,” says former international player Joe Brennan, who assisted Shaw in coaching Ireland for three years and played alongside him. “Yeah, he’s doing that in London. Lines them up in the morning and runs about 10k.”

Fragments of the players are still there. But in hindsight the topography of Shaw’s past suggests that there was nowhere else he was ever going to end up but in sport.

That it is coaching the most successful team in Irish hockey history may just have come down to a decision by his parents Victor and Nuala, when he was 16 years old.

His father, who grew up in Rialto in Dublin, played hockey with Glenanne, while his mother from Sallynoggin in Dún Laoghaire played camogie with Cuala. Hockey was always going to figure.

Thing was Graham could play everything. At school in Colaiste Eanna he played Gaelic football and hurling. During the week and at weekends he played hockey and soccer.

Future Dublin GAA star Collie Moran ran along aside him on the school team. In soccer he began with Firhouse Manor and moved to Lourdes Celtic, where his midfield partner was Damian Duff. The Shaw and Duff parents would share taxi services for the two teenagers to and from training.

“Duffer was just a very quiet lad in the back of the car,” says Victor. “We just used to share the driving for the lads to go training. Duffer was a nice lad and sat in the back, never said a word.”

Good at them all

Despite the clutter of sports, hockey was never far away, nor made out to be more or less important than the GAA or soccer. Shaw was good at them all. When Oxford United asked him over to England for a trial, the 16-year-old was also playing underage hockey with Ireland. He went over.

“Oxford wanted to sign him. I still have the letter at home,” says Victor. “But we didn’t fancy it. He was still at school, and so we said ‘no, do your leaving Cert’.”

“No, he didn’t throw any wobblers. He did accept it. He had the hockey, and was also on the fringes of the Ireland under-16 soccer team.”

Hockey and Glenanne won those mini battles of choice, and Shaw was set on his road to the Irish senior team. Along the way he went to Dundrum College and UCD, before a stint in the University of Ulster for a degree in sports science, playing with Ulster side Annadale for a spell before returning to Glenanne.

His style was intelligence and hyper-competitiveness. Lack of aggression was never an issue. His father says it. His team mates say it. He says it himself. “Playing tennis on holidays was like a Wimbledon final,” says Victor.

Brennan, who played at sweeper for Ireland with his friend and Glenanne teammate Shaw in midfield, had an equally close view of that streak.

“He is extremely competitive. The aggression he had to curtail. You know any good player plays on the edge. I would be afraid of him sometimes on the pitch. We were so tight as a group we didn’t want to let each other down.

“But I always looked to Graham Shaw. He saw things on the pitch so, so quickly. He brought me along. I was sweeper. He was centre mid.”

After 151 caps the coaching came while he was still a club player. With his brother David and cousins on the Glenanne team it probably wasn’t the easiest place to start, but start there he did.

From that success seemed to follow. Whether it was with Rathdown School in Glenageary, not far from where his mother grew up, with Monkstown men or Loreto women, the teams he worked with won stuff – Monkstown their first Irish Senior Cup in 99 years with Shaw as coach in 2013.

His break into the women’s side came when Irish coach Darren Smith invited him to be his assistant. In 2015, Shaw was part of the crushing blow Ireland suffered when the team narrowly lost out on qualification for the Rio Olympics after a penalty shootout with China. Soon after Smith returned to New Zealand. Shaw stepped up as head coach.

“He is a very good motivator,” says Brennan. “Now this team are in unchartered waters, and Graham has managed that superbly.

“They are not playing with pressure. Pressure games were qualifying for the World Cup. They are playing with freedom, with smiles. He has been able to convince them of that.”

Shaw also introduced conditioned Irish athletes to the world scene. He brought in a good strength and conditioning coach (S&C ) coach, and has gotten the team to buy into the concept of not just completing the running drills but living like athletes 24-7.

With the peerless Megan Frazer out long term with cruciate knee ligament complications, he also seeded the team with younger players like Roisin Upton (24), goalkeeper Ayeisha McFerran (22) and Zoe Wilson (21).

“They have physically changed over the last three years,” says Brennan of the Irish players. “They are fitter. But the best thing about Graham Shaw is that he is a winner.”

Living in Knocklyon with wife Ali, and children Jack and Ellie, Shaw says he has tempered his coaching style. It works.

Spain now and a world semi-final, and everyone is asking how he did it. Professional football’s loss has been hockey’s gain. The 18 girls who run out smiling on Saturday in Queen Elizabeth Park have at least come to see it like that.