Netherlands ‘have done their homework’ on final opponents Ireland 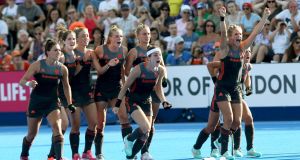 The Netherlands side after their World Cup semi-final penalty shoot-out win over Australia. Photograph: Sean Dempsey/EPA

“I’ve been asking the Dutch for three years for a bloody game and they won’t bloody play us, so they don’t have a choice now.”

Graham Shaw is finally getting his wish to play the Netherlands, doing so on the biggest stage possible as they go head to head at the Olympic Park on Sunday afternoon.

The Dutch had battered all around them prior to Saturday’s semi-final - scoring 28 goals in four games, conceding one - when they dominated Australia but conceded a late penalty corner for a 1-1 draw, sending the game to a shoot-out.

The world number one side held firm to advance, something that skipper Carlien Dirske van den Heuvel described as an “important wake-up call”. She had made waves earlier in the competition by describing the English hosts as playing “like headless chickens” before predicting a 5-0 win in their quarter-final tie (it ended 2-0).

But she was far more circumspect when describing the surprise final match-up.

“We don’t know much about them other than this tournament, we know they have played great hockey,” she told The Irish Times. “They are fighters, defend with the whole team, attack with the whole team and there is a reason they are in the final. We are number one, they are number 10 (16)or something like that but tomorrow it’s 0-0.”

Her coach Alyson Annan, meanwhile, said they had an inkling they would meet Ireland at some point along the journey.

“We have done our homework,” she said. “After the first [IRISH MATCH], we did video on them. To be perfectly honest, they were in a very difficult pool but finished first which is fantastic so we took notice very early on and started doing the work early, knowing there was a possibility we would meet them.

“They are one of the few teams here who move the ball quickly, play simply and work so hard. They are very confident in the way they play and I don’t think we should under-estimate them. There has to be a reason why they are in the final.”

And does she reckon her national federation are likely to be more accommodating to Irish requests for matches in the future?

“We have a very limited window to play matches. We are not together a lot so when we do play our practice matches, we have to make choices. When it comes to Argentina or Ireland, we will always choose Argentina but maybe now things will be different.”