Ireland embrace the preposterous brilliance of a World Cup final 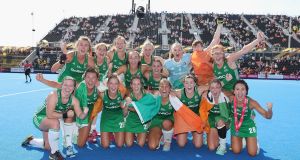 And then all of a sudden it became preposterous. A crushed Spanish side, sullen and disbelieving, fell into wordless heaps in the middle of the pitch as the entire Irish team ran to a corner, a stampede of screaming green and white.

Coach Graham Shaw went off the other way, a solo dance in front of the stand, the stress of Ireland’s surgical defensive performance and penalty shootout against Spain released and finally leaving his face.

Emotional conclusions to World Cup finals rarely arrive so raw and authentic, the Spanish players emptied not by the running but the trauma of defeat, barely able to pull themselves to their feet, Ireland soaring.

For the Irish women this has been a World Cup of pressure loads and stress-bearing joints. Far from failing they magnificently held as Spain poured into their danger zone throughout the second half on Saturday, defiantly rising in the final five minutes to bear their teeth.

And from those four quarters of clean picked tackling and composure and the penalty shootout, the Irish team danced their way back to the centre of the pitch. “Bewitched” were played over the PA as forward Nikki Daly led her teammates in a jig just yards from the touchline. The fans joined them in the stands.

Surreal the players kept saying. A World Cup final. The fans were stunned, the players were bewildered, the tournament was upturned with only the Netherlands’ defeat of Australia after penalties in the other semi-final restoring some sense of the status quo. Daly’s Irish dance was the least weird thing in the stadium.

The players summoned up words to describe what had just happened and then suddenly the words would leave them.

“I just want someone to pinch me,” said the goggle wearing Irish defender Zoe Wilson, as her sentence stuttered to an happy, carefree end. “Oh it feels amazing, absolutely amazing. I can’t believe we are in the finals of the World Cup.”

Scramble for hockey tickets as Ireland stick it out https://t.co/UvrGMKDhxL

“It’s Ireland first World Cup in 16 years. We are ranked 16th in the world. We promised ourselves we would go out for every game and enjoy it.

“We promised ourselves that we would have no regrets in this competition and leave everything on the pitch and at the end of the day we could look at the score line and accept it.”

The double goal scorer from Ireland’s winning penalty shootout, Gillian Pinder, was dragged from the tumbling Irish bodies and placed in the middle of the pitch for a stock interview. Television talks and players walk. Not this time.

“It’s a dream come true,” said Pinder to the crowd momentarily silenced. It was a cliche. But it accurately embodied the moment in the London 2012 Olympic Park. How truthful and sweet and bullseye those well-worn words sounded.

But the team returned to mob Pinder, pushing past the camera and microphone, 18 Irish faces hysterically chanting into one small frame. Television protocols be damned. But that picture captured gold with Pinder’s words “it’s a dream come true” hanging in the hot muggy air.

There were tears in the crowd as well. Of the 10,000 fans most were Irish who had gobbled up the tickets that Olympic champions England must have believed were for them and their fans. It was a pool tailored for the home side and brazenly taken by Ireland for this audacious assault.

Most of them had personal connections with the team. Mothers, fathers brothers, cousins, club teammates, coaches, school teachers, physios, local publicans, ex-players, umpires, officials, they were all there howling out nicknames and their love to the players.

It was the parochial becoming global, Irish women’s hockey inflating far beyond the margins of past history or even reality.

Those in the towering seats on the far side of the pitch, which rose to six or seven stories high, began their slow migration with flags and painted faces, and plastic glasses of beer. Around behind the goals they came to where the octane fuelled players were coming to terms with their moment of sporting history.

“You are on your own up there,” said Gillian Pinder, who had not taken any of the one v one penalties in the drawn quarter-final match against India but stepped forward this time and scored two goals, her last securing Ireland’s place in the World Cup final.

“I don’t have anything that I traditionally go and do,” added Pinder.

“I just go up and see if I can move the keeper and whenever the gaps open up see if I can slot the ball into the goal. We practiced them during the week but I think I only took two and I missed the two.

“I didn’t make the cut for the Indian game and then I made the cut. Today something changed and I joined in. I just felt I could do it.

“There’s always three of four who definitely want to take it and then there are others, who will take it one day and maybe not the next . I said I wanted to take one and they said go for it, take it.”

By the end of the second semi-final they could begin to refocus on their final challenge against the number one team in the world.

“Going into the tournament we just wanted to get out of the group and make a quarter-final, if necessary doing so via the crossovers. Once we won the group and we went straight into a quarter final , our ambitions changed.

“Now we have new goals . It’s going to take a lot to beat us. We may have had a little bit of luck with the way the draw worked out. But we’re in this to win it and ready to go all the way tomorrow.”

And so a silver medal will not be enough. They have lived in these unchartered waters for too long to become queasy now. Ireland against the Dutch in the World Cup final in the shadow of London’s Olympic Stadium. It is all quite preposterous.