Angling Notes: Small band of diehards make the most of Mask visit

After the loss of this season’s last major event, we can only look forward in hope to 2021 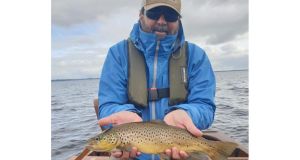 Brandon Hamber with a 1.75lb trout from the Cornamona area on Lough Corrib.

Covid-19 put paid to yet another important fixture earlier this month with the cancellation of the annual Vintners’ Two-Day Fly-Fishing Competition on Lough Mask.

For the past 16 years, Clonbur in Co Galway always came alive with over 100 anglers from across Ireland converging on this pleasant Gaeltacht village, with bed spaces at a premium and the resulting economic boost to the local businesses.

This was the last substantial competition of its kind to be cancelled throughout the country because of the pandemic in what could only be described as a very disappointing year in every respect. Now, with just days left in the season, we look forward to a brighter 2021 with Covid-19 hopefully behind us!

However, a small gathering of diehards did meet up in Burkes Restaurant in Clonbur (with all the social distancing, etc. very much to the fore) and fished Mask for the two days with reasonable success. For me, those sizzling steaks, cooked to perfection with all the trimmings, more than made up for the absence of the usual congested gathering.

Lough Sheelin appears to have turned a corner with the trout finally on the move; however, it is important to be in the right place and it’s all about fishing ‘wets’, according to fisheries officer, Brenda Montgomery.

Claret Dabblers, Daddy and Hopper patterns, Bibios, Red-tailed Peters, Stimulators and Bumbles all feature now and, with the desired south-westerly winds dominating, it is a question of perseverance.

Overall, angling numbers average eight to 10 boats per day with preferred fishing times from 10am onwards and the later part of the afternoon. Thirty one trout were recorded for the week.

Angling on Lough Corrib was, for most of the outgoing week, “difficult with little or no consistency in hatches or suitable conditions”, according to fisheries officer, Declan Gibbons.

In the Cornamona area, angling guide Tom ‘Doc’ Sullivan had a quiet week with anglers earning their respective catches. Trim anglers Dermot Leonard and Tommy Keoghan landed five fish over two days while Chris Oliver from Navan landed a 1.5lb fish on his first attempt at dapping a cricket.

Tom ‘Doc’ and John Somerville jnr, guided four Moycullen ladies for a half day with one of the group landing a three-pounder dapping a cricket. Brandon Hamber was rewarded with a 1.75lb trout on a dry daddy.

In the Annaghkeen area, Castlebar angler Peter Grey had three on wets, all sportingly released. The Oughterard Anglers’ Association hosted the John Gill Cup at the weekend and winner on the day was John Decay with two fish.

Angling guide, Basil Shields of Ardnasillagh Lodge, reported a very tough week. Those staying at the lodge that had action were Barry Collins with two fish on wets and Michael Mulligan had three. Conor O’Mahony and Mick Byrne both caught two over 2lb fishing with their friend, 85-year-old John Murphy.

While out walking on Portrane Beach in north Co Dublin last week, I came across a fresh bass of about six pounds washed up on the shoreline. The fish appeared to be in good condition except for the gulls who were beginning to move in for a feed.