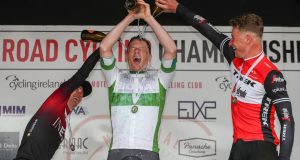 Sam Bennett celebrates on the podium with Eddie Dunbar and Ryan Mullen after his win in the 2019 Cycling Ireland Road Cycling National Championships in Derry. Photograph: Bryan Keane/Inpho

After his “dream” year of wearing the green, Sam Bennett has confirmed his absence from this weekend’s National Road Race Championships, ending one glorious season in Irish cycling and with that presenting the opportunity for another.

As he indicated after his final stage win in the Tour de France, Bennett wanted nothing more than to defend the title he won for the first time in Derry in July 2019, only travel restrictions and an upcoming schedule of races with his team Deceuninck-QuickStep means he’s not in a position to return home.

“Unfortunately I will not be able to defend my title this year at the Irish National Championship due to goals set out by myself and my team for the remainder of the season,” said Bennett. “I am also trying to limit the health risks of travelling.

“It was my dream to wear this jersey at some of the biggest cycling races in the world. I always tried my best to represent it to the best of my abilities.”

That title won last year, Bennett beating Eddie Dunbar to the line in the last sprint between the two-man breakaway, afforded him the right to wear various hints of green on his team jersey and helmet, including a green shamrock, further highlighted when he won the green jersey for the first time after stage 5 in the Tour, and wore it again for the last 11 stages, including as outright winner on the Champs-Élysées.

Bennett also went into the Vuelta a España last August and September and won two stages, also finishing a close second on the final bunch sprint in Madrid.

It means a new name in the Irish champion jersey for the rest of this season and 2021, with two former champions – Nicolas Roche and Ryan Mullen – among the confirmed starters for this weekend’s championships which are being staged at Knockaderry in Limerick and promoted by Newcastle West Wheelers.

Closed to spectators, the five-race programme begins on Friday with the 22.3km time-trial, Roche and Mullen also contesting that, with the men’s 155km road race set to commence early Saturday afternoon. The 26-year-old Mullen won the title in 2014 and 2017, and Roche, now aged 36, won in 2009 and 2016, with Ben Healy of the UK Trinity Racing team also sure to be in the mix.

With the 2020 Tour finishing two months later than originally planned given the entire season rescheduling around Covid-19, there are also still two more Grand Tours to come – the Giro d’Italia and Vuelta a España overlapping in October.

The Giro starts this Saturday and races from October 3rd-25th, and Bennett wasn’t considered for that, but hasn’t yet ruled out the shortened 18-stage Vuelta, set to take place from October 20th to November 8th.

Dunbar was originally set to ride the Giro with his team Ineos Grenadiers, but as feared the broken collarbone he sustained at Tirreno Adriatico three weeks ago means he’s now out, with Britain’s Geraint Thomas, who didn’t ride the Tour, their team leader.