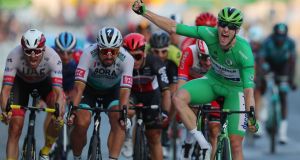 Sam Bennett wearing the best sprinter’s green jersey celebrates as he crosses the finish line on the final stage of the Tour de France on the Champs Élysées in Paris. Photograph: Thibault Camus/AFP via Getty Images

For three weeks he was waking up at a different time and heading for another place, and the first thing and the last thing Sam Bennett tried not to think about was winning a stage and winning the green jersey in the Tour de France, at least not in the same train of thought.

All this week, back at his home in Monaco, it’s the only thing Bennett can think about it, the green jersey won alongside two stages and each one no longer mutually exclusive. Set against his own cemented confidence and embedded disbelief, some say it will change everything about his cycling career, others say it will change little at all, and Bennett himself says it will probably conspire towards something of both.

It hasn’t been all about recovering and rejoicing – on Wednesday, Bennett drove seven hours north to Dole, finishing second in the town criterium won by France’s stage 8 winner Nans Peters – the first and lasting reflections lingering far beyond the finish line on the Champs-Élysées last Sunday.

Nice, Saturday August 29th, stage 1 of the 3,482km that will end up back in Paris three weeks later, and the first prize on offer isn’t just a stage win, but also the yellow jersey, last worn by an Irish rider in Stephen Roche, 33 years ago; Bennett finishes in fourth.

“The thing about that first stage, it had its own pressure, everybody had an opportunity to win yellow, all felt the same way, and we were speaking about it afterwards. The days before, because the occasion is so big, there was so much on, the legs feel like jelly, you feel every niggle, you convince yourself you have every problem.

“Then you’re in the race, concentrating, all those thoughts go away, you’re in the zone. Then it rains, the crashes happen, and I got caught up in two or three, then got the flat tyre, I thought, ‘if it doesn’t happen, well sure all this happened’ . . .

“Then all of a sudden I was there on the last lap, had the legs, felt ready to race. On the last lap, the last straight, I was more confident than usual. With so many crashes, I was still thinking ‘don’t crash on the first stage, get through this first stage’. But also don’t let the opportunity pass...”

Privas, Wednesday September 2nd, the end of the 183km stage 5, and for a third time Bennett finishes in the top-four, but takes over the green jersey from previous seven-time winner Peter Sagan from Slovakia; it was last worn by an Irish rider in Seán Kelly, also from Carrick-on-Suir, in 1989.

“The one thing I found strange, even though I’d never won a stage on the Tour, I was one of the favourites. There is that expectation. I suppose it did all feel new to me.

“Before [in 2015 and 2016], I just wasn’t ready. It was a fantastic experience, but when you’re in a different race, a race within the race, to get results, it did feel like my debut. But I never fully understood how much work goes into that green jersey, and what it takes from trying for the stage wins, especially for a pure sprinter.

“Then when I started going for it, I had to race the first hour of every stage, to make sure my competitors didn’t get in the break, for the points. So that’s energy gone each day. At the intermediate sprints, they are shorter, but more explosive, so that’s energy gone each day, going against the points chaser, and the pure sprinters, who are saving while I’m racing.”

Île de Ré, Tuesday September 8th, and victory in the bunch sprint that was the finish of stage 10 means Bennett becomes just the sixth Irish rider to win a stage in the Tour de France, only the second since Shay Elliott to win a stage in all the Grand Tours; part of the emotional aftermath is the recognition Bennett knows will come with it.

“I think underneath it all, it was yes. I’m competing at the highest level, have been a number of years, and in other countries, there were people doing less in the sport and getting much more recognition. It’s not that I do the sport for that, but I think I was doing pretty well, and was wondering what I’d done wrong.

“But I knew if I wanted the recognition, it would have to be in the Tour de France, to get the results here. I’m the same rider the last two years, but it’s only now, that I’ve done it in the Tour, it’s been recognised.

“So I was just thinking this is the Tour de France, this was the dream, and the pressure, the occasion, it just got too much. Like, the knee injuries, the crashes, all those moments in my career, and it was the last chance and I just got into the pro ranks. And it always took longer than it should have, but it just made every bad occasion worth it in the end. It was all character building, and made me who I am today.

“In future, I think if I don’t have the legs, that pressure will be hard. The only time I felt that was last year, after the Vuelta, I went to the World Champs, in the UK, and there were so many Irish flags, Irish people outside the bus, and I just didn’t have the legs. That was crippling, that day. But when I’m going good, things are normal, it won’t bother me.”

La Roche-sur-Foron, Thursday September 17th, and after surviving and at times thriving in the last of the three Alpine Stages, also winning the 20 points that came with the early intermediate sprint, Bennett ends the stage with 52 points to spare on his Slovak rival; more than the 43 points Sagan had been deducted for his dangerous riding on stage 11, Bennett would end up winning by 96.

“A green jersey in the Tour de France, to be able to compete with a rider like Sagan, who’s so incredibly strong, a three-time World champion, is such a highlight of my career. And it was an enjoyable battle, even talking with [third-placed Matteo] Trentin. It hurt, a lot, because it was so intense, and I take pride in that I could compete with that calibre of rider.

“There were parts of the race where I know I made mistakes, lost points. So I know myself that everything is give and take, but it was nice in the end to able to say I really deserved it, really owned it.

“It’s also like I feel I fully deserved my place in Deceuninck-QuickStep. Sometimes you can have a bit of the imposter syndrome, you don’t know are you good enough to be in this position. The riders that have come through this position have always got results, I didn’t want to be the first not to get a win in the Tour. I feel now this is my position, I’ve earned it, with their help. I can relax knowing I should be in the place I’m in. That’s comforting, takes pressure off.”

Paris, Sunday September 20th, and mathematically safe after points gained at the intermediate sprint, Bennett becomes only the fifth rider in Tour history to win the final stage on Champs Élysées while also winning the green jersey, the first since Mark Cavendish in 2011; it’s also the first time Sagan has lost the green jersey classification in the seven Tours he finished.

“That definitely exceeded my expectations. I went in thinking if I get one stage win, I’ll be happy. One stage win in the Tour de France can make your career. And then I’ll have one in each Grand Tour, that would be fantastic.

“After I got that first stage win, of course I was a mess, after the finish, then all of a sudden the green jersey is there. It’s something I said before the race, I won’t go for it, but if it comes my way, I’ll have a look at it.

“But three of my ultimate races to win are on the Champs Élysées, Milan-San Remo, and World Champs. As a kid, the Champs Élysées is the one sprint I played over and over again, that side view of the sprinters, around the corner, sprinting all the way to the line. Winning it, I just never thought that would happen.”