‘After putting myself in the position, I don’t know if I actually want to be there’ 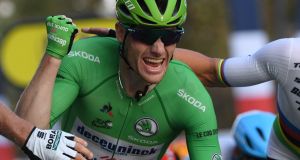 Sam Bennett will be quite content if his Tour de France success does not bring him celebrity status – the Irishman is simply happy to have proven his place amongst the world’s best sprinters.

Bennett earned his first career Tour victory on stage 10 but then outdid himself by unexpectedly winning the points leader’s green jersey – the first Irishman to win any jersey at the Tour since Seán Kelly took green in 1989 – before an emotional victory on the Champs-Elysees on Sunday.

Bennett’s success sparked long celebrations as he shared an Irish whiskey with his Deceuninck-QuickStep boss Patrick Lefevere and gorged on pizza with team-mates in the French capital, while on Monday night his hometown of Carrick-on-Suir held a parade in his absence.

The soft-spoken 29-year-old has now enjoyed several days in the spotlight – something that has not always come despite previous success at the Giro d’Italia, Vuelta a Espana and elsewhere.

He insisted he never craved recognition, but that did not stop him wondering why he did not get it.

“I’m competitive at the highest level and have been for a number of years,” he said. “Riders from other countries have been doing less in the sport and getting more recognition.

“It’s not that I only do the sport for that, but I did sometimes think, ‘Am I doing something wrong? Did I say the wrong thing?’

“It was weird. But I knew to get that recognition I had to do it in the Tour.

“Then again, I’m not a guy who likes to be in big groups, I like my quiet night in so after putting myself in the position, I don’t know if I actually want to be there.”

Whether he wanted it or not, Bennett was one of the centres of attention on Sunday night, with Lefevere keen to toast the man he worked hard to sign in the winter.

Bennett joined Deceuninck-QuickStep after finding his path at Bora-Hansgrohe blocked by the man he has now beaten to green, Peter Sagan, who had won the classification a record seven times since 2012.

For a sprinter, signing for Lefevere’s perennial winning machine is like being handed the keys to a Ferrari.

Bennett admitted he sometimes wondered if he was worthy of following the likes of Mark Cavendish, Marcel Kittel and Elia Viviani – but those doubts are gone now.

“Now I feel like I fully deserve my place within Deceuninck-QuickStep because sometimes you can have a bit of imposter syndrome,” he said. “You don’t know if you’re good enough.

“The riders that came through in this position [in the team] always got results. I didn’t want to be the first one not to get a win in the Tour with this support and this class of rider riding for you.

“Now I feel that I’ve earned it with the help of my team-mates. I can relax knowing I should be in the place I’m in. I hope that doesn’t sound too cocky but it takes the pressure off and now I just want to go again for the next race.”

Bennett will be on the criterium circuit for the next few days to show off that green jersey before returning to more serious racing in mid-October, though his schedule is not yet finalised.

One event that could come before then is the Irish national road race, scheduled for October 4th, but Bennett is not yet sure if he will be able to take part.

“I don’t know if it’s happening and if I can get to it,” he said. “I haven’t spoken to the team, but if there’s one thing I really would love it is to keep my national champions’ jersey.”