Sam Bennett shifts his Tour focus to Paris in green 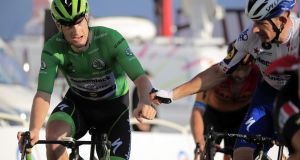 A week on from having one eye on the stage win, the other on the green jersey, Sam Bennett admits the only focus now is what’s on his back. Six stages to go, 45 points ahead, it may still come down to the final bunch sprint on the Champs Élysées next Sunday.

Speaking on the second rest day at his Deceuninck-Quick Step team hotel in La Tour du Pin, ahead of the first of three Alpines stages of this year’s Tour de France, Bennett also sees that task as twofold: doing what he needs to do to stay safe in green and ensuring Peter Sagan doesn’t do enough to take him out of it.

“It is a nice lead at the moment, but it can come down very quick,” he says. “Peter is one of the best in the world, so it’s not going to be easy. It will always be a fight. Not only at the intermediate sprints, but also to make sure they (Bora-Hansgrohe) don’t go on a breakaway, and then to finish the stage.

“That’s three points throughout the stage, but the team have been doing a fantastic job for me. I also think the day before, where his team rode very hard to get rid of me, maybe that hurt them a little bit on Sunday. He (Sagan) seemed to be a bit more tired, but he has incredible strength, and I’m sure he will recover really well, will still be very, very hard to compete with over the next few days.”

There are also the pending results of the second round of Covid-19 testing to be cleared too, only what is certain is that Bennett’s first Tour stage win on the island of Île de Ré last Tuesday, winning back the green jersey in the process, took some pressure off, only to add a little more. He didn’t start this Tour dreaming about the green jersey, but he’s certainly dreaming now about finishing in it.

“No, no. I always thought about it, thought if I was close I’d go for it. Look, it seems like a big opportunity now. This year, I said I’d just go for stages. Then I got my stage, and also found myself pretty close. I think I’ve probably sacrificed some other wins too, and that’s to help bring home this green jersey.

“I think it is, the first week I wasn’t falling asleep until 2 or 3am. That pressure was off after the stage win. But now I find myself in a whole new position, a different type of pressure. But you somehow get used to it. It’s two weeks now, and it becomes more normal.

“I’ve certainly found at this Tour, the last 5km is so fast, you don’t think you’ll even have the legs. But then when you do get up to the front somehow the legs are there, so it’s just about staying mentally strong.

“The other thing I do find quite funny is that I’m getting so much support from home, people putting up banners in my home town, I love that, but that’s some expectation too.”

After three pure mountain stages, Friday’s rolling Stage 19 finish at Champagnole may well through up some significant green points, and the Champs Élysées certainly will.

“It (Friday) could be, you just never know. I can’t let anything get away from me, so I’m going to have to fight. But I’m really just focused on what I need to do. I’m also feeling okay, it was just the one bad day, last Friday, but I’ve recovered really well, and just trying to stay mentally fresh at this stage.

“For the Champs Élysées, of course it’s the one bunch sprint you always watch growing up, it’s one of the most iconic ones. If I could do that, in a green jersey, that would be amazing.”

Bennett has now enjoyed seven days in green, winning it back last Tuesday, after two days in the first week, five days last week, and will wear it for the eighth day on Tuesday’s Stage 16, the 164 km from La Tour du Pin to the mountain rooftop finish at Villard de Lans, with hardly a single stretch of flat road, highlighted by an 11km climb into the Vercors Massif.