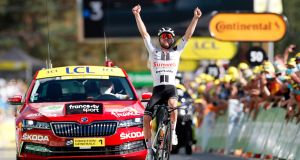 Switzerland’s Marc Hirschi celebrates as he crosses the finish line at the end of the 12th stage of the Tour de France between Chauvigny and Sarran. Photograph: Sebastien Nogier/AFP via Getty Images

Nobody likes to play on Tour de France novelty more than the Tour itself, and there was plenty of it throughout the longest stage of the race from Chauvigny to Sarran before Marc Hirschi took a first win in what is also his first Grand Tour.

Having finished second and third in two stages in the opening week, the nouveau Hirschi made sure of it on stage 12, the 22-year-old Swiss rider breaking clear over the last main climb of the day at Suc au May with 25km to go to finish 47 seconds ahead of a small chasing group. Not so much third time lucky as third time much deserved.

“Two times really close, and actually today I still didn’t think I’d back it, I was so doubtful,” said Hircshi, his first professional victory on any stage, and the first Swiss winner of a Tour stage since Fabian Cancellara in 2012. “So it feels super nice, it’s hard to find words. I still had that picture in my mind from the first two days, when I was so close.”

Nicolas Roche, his right leg still stitched up after Tuesday’s crash on stage 10, also rode impressively hard and aggressively over those final 25km, effectively to limit the pursuit on his Sunweb team-mate and finished 10th best of the day, 56 seconds down, with another Team Sunweb rider making the top 10 when Soren Kragh Andersen finished third behind former French stage winner Pierre Rolland (B&B Hotels-Vital Concept).

That position helped move Roche up to 70th overall, gaining five places on the stage, and he now sits 1:29:54 behind – a top 10 finish at age 36 more proof his best Tour days aren’t yet behind him. His efforts were rewarded when he was named best team captain on the stage, with Sunweb taking best team honours.

Despite the 218km distance through central France from Chauvigny to Jacques Chirac’s old town of Sarran – the only stage longer than 200km this year – there was no shake-up in the general classification, Primoz Roglic safely retaining his yellow jersey, with only some very gentle chassé-croisé in the race for the green jersey.

Sam Bennett started the day 68 points ahead of Peter Sagan, 243 to 175, thanks in one part to his second place finish on stage 10, and in another part to Sagan’s relegation for dangerous riding, and finished it 66 in front: the Irish rider did gain two more on Sagan at the intermediate sprint at Le Dorat after 51km, taking seventh place, with Sagan in ninth, and after that only Sagan was interested in chasing more points at the finish.

While Bennett was content to roll in at the very back of the last group, the Deceuninck-QuickStep rider coming in 160th, in the group that was 26:25 behind, there was a more up-front approach from team Bora-Hansgrohe. With that the Slovak rider came home in 13th place, gaining back just four more points in the process, which means Bennett still has that comfortable lead of 252 points to 186, the last properly flat sprinter-friendly stage being the final one the finishes on the Champs-Elysées on Sunday week.

Dan Martin, still struggling with a fractured bone in his sacrum, finished the stage in 71st, part of the group that finished 2:49 in arrears, and it seems the Israel Start-Up Nation rider is simply unable to make his usual sort of mountain efforts. He now sits 58th, 1:15:57 behind.

Roglic (Jumbo-Visma) maintained his overall lead as the race turned into its second half, and remains seconds clear of defending champion Egan Bernal (Ineos Grenadiers) and 28 seconds over Guillaume Martin (Cofidis).

There was six-rider breakaway early on, which at one stage had gone close to six minutes clear, before they were reeled in with 43km to go. It was later on too when the stage passed through Saint-Léonard-de-Noblat, also known as Raymond Poulidor’s town, one of the Tour’s most celebrated riders, who never won the race outright but did finish on the podium a record eight times. He died last November, the novelty of this year’s race passing through Saint-Léonard-de-Noblat only realised then.

It was something of a novelty day too for Sagan, who since making his Tour debut in 2012, has worn the green jersey on stage 12 every year except for 2017 (when Marcel Kittel was in green), and in 2020, when Bennett is wearing it; and every year since he’d worn it to Paris too.

Asked before the start about being deducted the 43 points he’d originally won on stage 11, before the race commissaries deemed his final barge on the Belgian Wout van Aert as out of order, Sagan said: “I have to accept it [the commissaires’ decision]. But I did my line, I went from the back and I saw a little space there.

“You know, I saw that the barriers were pretty close, but after the middle of the barriers there was something with branding, some pole there, going 90 degrees out. If I keep going like that for sure I am going to touch it with my handlebars, so I moved a little bit left. I didn’t think it was a dangerous move. I don’t think so, I did my own sprint, I didn’t once make somehow to block somebody or something. I don’t think I did. I was fighting to survive myself.”

Sagan showed some of that fight at the finish, only Bennett looks to have plenty of points to spare to survive in green.

Friday’s stage 13, the 191km from Châtel Guyon to Puy Mary Cantal, is arguably the hardest stage of the Tour, with seven climbs ending with the highest pass of the Massif Central.