Sonia O’Sullivan: Savouring the last of summer on my very own Tour of Ireland 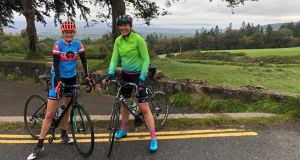 Sonia O’Sullivan and Annalise Murphy caught up on a cycle in Wicklow.

The plan was to run my own 10-mile road race in Cobh and then head to Donegal for the Ballyliffin 10-mile event. I’d never actually been to Donegal before, and that was certainly going to be a novel trip.

Patsy McGonagle, the former Irish Olympic team manager, jumped on the idea and arranged for a specially commissioned medal to all finishers that would celebrate 20 years since the Sydney Olympics and my silver medal over 5,000m.

At least that was the plan for April – before the global pandemic got in the way. Then once the plans were scrapped and the months went by, I found myself in Cobh without the usual running around to events and commenting on Olympics or European Championships, so the idea of a trip to Donegal was back on the agenda, and my own little Tour of Ireland.

I’ve always had a thing about the Wild Atlantic Way and those metal posts with a wavy arm dotted along the entire coast from Mizen to Malin heads, landmarks to set your sights on along the way. There is no better stretch of road in the country to not only drive along, but stop off and take in some activity, running, swimming or cycling.

The first stop was at Mizen head, planned for the Mizen Loopers sportive. Even though that was also cancelled at the last minute due to restrictions in numbers for outdoor events, I joined in with a small group from Cobh Triathlon Club to take on the 140km undulating route.

On the approach to Schull, there is a worthwhile diversion 407m high up Mount Gabriel to take in the views over Roaringwater Bay, all the way out to Fastnet Rock, on a beautiful clear day. It’s funny when you reach the top and there’s always someone questioning that we are just going to turn around and go back down again, so no actual loop here.

You can’t always predict such fine days, and just have to take a leap of faith and dress accordingly.

You also have to be careful not to follow all the Wild Atlantic Way signs or you might never make it out of Munster, but one diversion worth taking is the sign to Lough Hyne, just a few kilometres outside Skibbereen. This is a salt water lake where the sea meets the lake and creates varying currents with the change of tides. A flat and safe place for a swim around Castle Island will cover about a mile, there is also the option to hire kayaks and paddle around.

Once down west, I decided to keep going and slowly make my way up north. I’m not great for long drives in the car as I like to get out for some activity along the way or check out some far flung independent coffee shop.

I’d also packed my Wild Atlantic Way passport, which you can purchase at any post office and then pick up stamps of where you’ve been to as you move along the route and explore hidden spots and well known landmarks along the way.

This year it’s been all about discovering what to do outdoors, with no indoor music, festivals or gatherings. In many ways I am reminded of the Great Ocean Road in Australia, just everything is that bit more rugged and green and wild.

After Cork, it’s a quick stop off in Kerry, heading along the Dingle peninsula on Sunday evening as most people were heading home. The summer was closing in, school starting back and it seemed a good time to join the 2020 ‘staycation’. There was a time when packing my running shoes was all I needed but now there is so much more to explore by bike that the back seat of my car is always home to my bike.

Another well know cycle route to be ticked off the list is the Conor Pass, on such a nice stretch of countryside. At 456m, it’s also one of the highest mountain passes in Ireland, looking back down over Dingle and ahead to Brandon Bay and Castlegregory. In many ways it’s probably an easier route to cycle than drive, even though the physical effort will be greater. The bike glides a lot better down the narrow winding road towards Brandon Point, the end of the road marked by another of the 150 signature discovery points and a clear view out to the Blasket Islands.

There was only one short route back to Dingle. There is always hope of a loop but in reality it’s straight back up the Conor Pass, as this was just to be a short cycle before heading on north.

On to Donegal, the ‘Alaska of Ireland’, as far north west as you can go to beautiful beaches, more narrow roads and more grass up the middle to satisfy the even greater number of grazing sheep roaming the roads, not slightly phased by any approaching cars or bikes whizzing by.

From the expansive Portnoo beach, I found myself on the narrowest road, the Santa Ana drive, definitely more suited to a bike than a car. From there it was around Rossbeg, thankfully a loop this time as I rode along with sleeting rain hitting me on one side while on the other the sun was beaming down, a common occurrence in Donegal.

After a few solo days I was welcomed to the Finn Valley athletic centre, everything on site including trackside accommodation. It was also the chance to complete the Donegal 10 mile, a promise I’d made back in April, in the local Drumboe woods accompanied by local athletes.

With just a small taste of Donegal, I headed south so I could squeeze in one more cycle before returning to home ground and regular routes. It’s always nice to revisit memorable cycles, so I checked in with Annalise Murphy, a regular cyclist in these parts, and we met up for a cycle in Dublin but straight out to the Wicklow mountains, via Sally Gap and across by Luggala, cycling up into the low-lying cold clouds then back down again amidst the heathers and changing autumn colours.

Cycling is becoming increasingly popular in this country, and it feels even more so this week with Sam Bennett back in the green jersey in the Tour de France, emphatically claimed after winning stage 10, expected for so long but in shock when it actually happened.

When this happens, the whole country is inspired to get out on the bike, maybe rejuvenated a little as the long summer evenings are drawing in and lights on bikes are required to get home safely.

Cycling is also a common ground for so many, not least the small cycling groups and clubs that meet up on an evening after an Irishman has just won a stage of the Tour de France. There’s that extra energy and buzz too when you head out the road and up the climbs, the local routes always that bit more attractive on another historic day for Irish cycling.

1 Gordon D’Arcy: the next fear for Irish rugby is England in Twickenham
2 Seán Moran: Fallout from Tyrone final celebrations will concern GAA
3 Pro14 teams need private planes to keep show on the road
4 How Dundalk’s opponents Sheriff started on wrong side of the law
5 Blow for Australian rugby union as Qantas end sponsorship
Real news has value SUBSCRIBE
Here is your handy guide to sport on television this week

Ireland name squad for conclusion of Women’s Six Nations 10:33
Graeme McDowell seeking confidence boost after tough US Open 10:21
Blow for Australian rugby union as Qantas end sponsorship 10:35
Nairo Quintana says he has nothing to hide amid doping investigation 09:25
Jamal Murray to the fore as Nuggets hold off Lakers comeback 09:02