Swimming, running, cycling and soccer make up the top-five in latest ISM survey 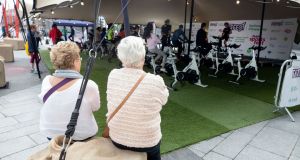 People take part in a spin class in Dublin - personal exercise remains the most popular form of sport undertaken by people in Ireland. Photograph: Inpho

Personal exercise followed by swimming, running, cycling and soccer remain the five most popular forms of sport undertaken by Irish people. Yoga, dancing, golf, GAA and weights follow as the 10 most popular sporting past times in the country according to the results for the Irish Sports Monitor (ISM) survey released on Monday

Almost half the population of Ireland take part in some kind of sport with numbers showing that 46 per cent of the population participate regularly in sport, an uptick of three per cent from the previous 2017 survey.

The 46 per cent equates to approximately 1.7 million people who gain from the physical, mental and social benefits that regular sports participation brings. In 2017 the survey identified that 43 per cent of the population participated regularly in sport suggesting that an additional 150,000 more people now participate than two years ago.

Previous studies, including the most recent, have demonstrated that a perceived lack of free time is a key barrier preventing more widespread uptake of sports and other physical activity. These restrictions come from a variety of external factors, including employment, childcare, and time spent doing other recreational activities.

Personal exercise (which primarily consists of gym-based activities) remains the most popular sport for people with participation levels in these activities increasing from 12 per cent to 16 per cent, while participation rates in all other popular activities remain broadly unchanged.

Sports typically played on an individual basis remain more popular than team-based sports with 42 per cent of all adults playing this type of sport, compared to eight per cent who play a team sport.

One of the ongoing disappointments is the strong gradient that exist across different socio-demographic groups in respect of participation. This is evident through lower levels of sports participation among women, those who are older, those from less affluent groups and those with lower levels of education.

This is the first of the ISM studies to include a question about ethnic background.

Given that those from a non-Irish background typically have a younger age profile, the analysis was restricted to those aged under 45 in order to ensure a fair comparison between the groups.

At an overall level it shows little difference in participation levels with those identifying as being from non-Irish white backgrounds slightly less likely to participate in sport than those from other backgrounds.

Illustrating just how much of an impact Covid-19 and the sports lockdown has had on the population, approximately a fifth, or, 19 per cent of all adults attended a sports event in the previous seven days. This includes a wide variety of events with adult and children as well as elite and amateur levels surveyed. Attendance at events remains unchanged since 2015.