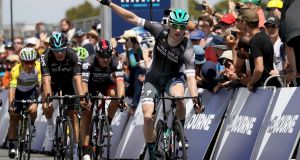 Sam Bennett of Bora-Hansgrohe celebrates as he crosses the line to win the Men’s Towards Zero Race Melbourne in Melbourne, Australia. Photograph: Robert Cianflone/Getty Images

Sam Bennett received a major morale boost on Thursday when he clocked up his earliest-ever season victory. Competing in the Race Melbourne event in Australia, the Carrick-on-Suir rider put in a superb sprint to claim victory.

Caleb Ewan (Orica-Scott), the rider who took four stages in the recent Santos Tour Down Under, was back in fifth place.

“It’s great to get a win under my belt early in the season,” said Bennett afterwards. “I want to thank Bora-hansgrohe for the nice race programme, and having us here and their great support, and also to the team-mates.

“The guys did a great job today supporting me – I’d like to thank them. They kept me well protected all day and set me up perfectly for the finish.”

Bennett has never raced in Australia before but headed over prior to the start of the recent Santos Tour Down Under. He was second in the warm-up event, the People’s Choice Classic on January 15th, and then third on the opening stage two days later.

“This was the first victory for the BORA-hansgrohe team,” said sport director Steffen Radochla. “It was a very fast sprint and Sam was unbelievably fast. We’re really happy with the race and this first win of the team.”

Bennett’s team has stepped up to the WorldTour level this season and has signed riders of the calibre of world champion Peter Sagan. The victory is important as it shows that Bennett has stepped up a level and is ready to perform strongly alongside his new team-mates.

“I feel surprisingly good,” he told The Irish Times this week. “It is nice to have a decent break and a good block of training. This time last year I was coming back from a big crash and I am in a much better place now.”

He said that he expects to help the team’s sprinters in the race. “I think we are going with a pretty strong team. We will be trying to look after Blythe or Andy Fenn. I think all but one stage is a sprint. I guess my role will be trying to shepherd them a little bit. Keep them out of trouble.

“Obviously it is our first race together . . .we are just trying to get gelled together, get to know everyone and how everyone is riding. It is exciting, I am looking forward to it and also getting stuck in again.”

In other news, Cycling Ireland has announced that former international Eugene Moriarty has joined its board. He is replacing Senan Turnbull as an appointed director.

CI president Ciarán McKenna said the his appointment is significant.

“Eugene will bring a wealth of cycling and business experience to the board, particularly in the area of corporate governance and organisational reform – with them being his two areas of expertise.”