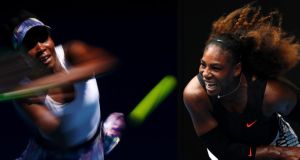 Venus and Serena Williams will play each other in the Australian Open women’s final on Saturday. Photograph: Clive Brunskill/Getty Images

This weekend in Melbourne, there are three tennis players aged 35 or over competing in the singles final of the Australian Grand Slam. This is the stuff of sports science-fiction becoming fact. It wasn’t that long ago (the 1980s) when 17-year-old tennis players were winning Grand Slams (Boris Becker, Mats Wilander and Michael Chang) and the world’s best players were retiring at the ripe old age of 26.

What is happening in Melbourne this weekend has implications for the entire sporting world.

As with all sports, tennis has long since rid itself of its bad habits - from players smoking at changeovers in the ’50s to John McEnroe boasting of never having seen the inside of a gym in the 1980s. The sport has positioned itself at the cutting of modern medical science - the results of which are now bearing fruition.

The rules used to be that competitors in an intensely physical sport would gracefully bow out as their 30th birthday loomed. But 30 has now become the new peak in a tennis player’s career. Even that bar might be set too low: look at the 36-year-old Venus Williams playing some of the best three set tennis of her career to battle through to Saturday’s women’s final.

It is this dramatic age-reversal which is making sport scientists sit up and pay attention this weekend. Swiss player Stan Wawrinka won his first Grand Slam three years ago when he was aged 29 -  Björn Borg had been retired for three years at his age.

These days there are only four teenagers in the entire top 100 of the game - and none of them at the business end of the sport. The man tipped as the ‘Next Generation’ star of the game - Bulgaria’s Grigor Dimitrov is now 25 and still without a Slam title - in the last decade Rafa Nadal had already amassed 10 by the time he was 25.

Players, who in old money would have been considered not just in the twilight of their careers but well past their best before date, are now dominating a sport that always used to replenish its talent on a predictably regular cycle.

Granted, in Melbourne this weekend we are looking at four once-in-a-lifetime talents - the Williams sisters, Roger Federer and Rafa Nadal - but such is how tennis is pushing the sporting barriers that experts are now predicting that Serena Williams is capable of winning a Grand Slam at the age of 40.

The tennis authorities are thrilled by the results in Melbourne this week - the big, marquee names are back in the finals, it’s the glory days of 2008 over again. There has been a realisation on the part of the sport that once this remarkable group of men and women eventually shuffle off the court, they are faced with the unappealing prospect of trying to flog David Goffin v Alexander Zverev tickets.

For this reason - and whether by slowing down the surface or reducing the ball speed - they are keen to facilitate cherished thirty somethings who are still central to the sport and generating box office finals.

But it’s in other areas that the sport is setting new industry standards. Some years ago the technology employed in both racquet strings and the racquet themselves changed dramatically. To play with the old wooden racquets you had to put your entire body into the shot - hence the attrition rate. But by no more than brushing the ball with today’s souped-up racquets you can still generate enormous power.

The old advantage enjoyed by younger players has been cancelled out - a player past his or her supposed physical prime can still hit winners from well behind the baseline.

The nutritional programme followed by tennis players now would put Olympic gold-medal winning athletes to shame. Every single calorie is accounted for. Novak Djokovic went from being a perennial quarter-final loser to a serial Grand Slam winner after switching to an unbelievably strict gluten free diet. That’s only the half of it though - Djokovic has written about how he celebrates a Grand Slam triumph with one square of chocolate. Yes, just the one!

There was never a footballer-style drinking culture in the tennis world, but there was a big cocaine culture in the game until recently. This has been ruthlessly eliminated and now post-match it’s straight into the ice bath followed by the sort of warm-down that would kill most of us stone dead within the first few minutes.

The top players - once just accompanied by a stony-faced coach - now travel with an entourage: not just the nutritionist and physical trainer but a physiotherapist and anyone else who can possibly provide a ‘marginal gain’ on the payroll also.

Even lower-ranked players who rarely get out of the early rounds at the slams can afford this as there is an enormous amount of money in the game - a good journeyman pro can be worth a fair few million. And it is this financial attraction that operates as a magnet for tomorrow’s sporting stars (not to mention their dollar-signs-in-their-eyes parents). You hear of eight-year-old tennis players these days working on their core stability.

A cash rich sport will attract the best sport scientists and whether it’s developing racquet strings that are easier on the tendons or devising new plyometrics routines, tennis is battling the natural ageing process with all the determination and passion of a Jimmy Connors fifth set decider at the US Open.

Other sports will be looking at the 36-year-old Venus Williams and the 35-year-old Federer still competing at the very highest level this weekend. Whether it be Rory McIlroy or Lionel Messi, sport has a clear financial interest in keeping its star names operative for as long as possible.

McIlroy initially attracted scorn for spending more time in the gym than he did on the driving range/practice greens but golf has since wised up. As McIlroy has said “I sometimes get questioned about the amount of stuff I do in the gym by golfers who wouldn’t know any better. I just say: look at where I was before training and look at me now: I’ve won four Majors and got to number one”. And golf is a sport where the 59-year-old Tom Watson almost won the British Open in 2009.

At the age of 35, Federer is eligible to play on the Masters Tennis Tour, where old duffers pat the ball around and the games are played at a walking pace - “hit and giggle tennis”. But because he’s the figurehead of a sport which has not just encouraged, funded and embraced cutting edge sports technologies he has been able to hose down younger, fitter players on his way to the Australian Open final.

His legacy will be his longevity. And what’s happening in Melbourne this weekend is a glimpse into a new sporting world where veteran is no longer a polite way of saying ‘past it’.