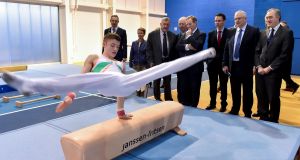 For a country that for so long has pined for a proper indoor sporting arena this is actually worth the wait – if not the jewel in the crown of the National Sports Campus at Abbotstown then surely the icing on the cake, and in some ways even better than the real thing.

Because climate change aside, there will always be some sports that because of our weather conditions can never be played outdoors, at least not with comforts like this. The Sport Ireland National Indoor Arena (to give it its official name) actually houses three indoor arenas, each one as impressive and as multi-functional as the next, facilitating both the high-performance and recreational ends of Irish sport, and everything else in between.

The centrepiece is the 200-metre indoor running track, partly laid on hydraulics, which means the bends can be raised for competition purposes, or else levelled, allowing the floor space to be used for a variety of purposes from concerts to show jumping events.

The interior space – some 18,000m2 – is larger than the entire stadium dimensions of Croke Park: it also comes with a variety of seating arrangements and is capable of staging national and major championship events, starting with next month’s Irish Indoor Athletics championships.

It’s also comes in slightly ahead of time and marginally under budget. The first sod was turned just 18 months ago, in June 2015, the final cost of €38 million coming in two annual allocations from the Government.

That’s not saying it’s ahead of its time: the Government has been promising to build an indoor arena for the last 30 years, going back to 1987, when then Taoiseach Charles Haughey, after a feasibility study costing over one million of our dear old punts, approved a site in the Dublin docklands. That never materialised.

No regrets now, however, from the range of Irish politicians on hand for the official opening shortly after 8.0am this morning, including An Taoiseach, Enda Kenny.

“This is an extraordinary place,” said Kenny. “It’s time for this place, it is past time, given the sort of personality and mentality of our people and interest in sport, right across the spectrum. We have some 20 governing bodies now at this sporting HQ, and we’re proud of the achievements of our elite athletes. And this presents the opportunity for those who are either members of the general public, or who strive for the highest levels of elitism.”

Another part of its attraction is its accessibility (for me, a mere 20-minute drive from the roof of the Dublin Mountains, albeit before rush-hour): the entire 520-acre site at Abbotstown, just off the M50 at Blanchardstown, already houses the National Aquatic Centre, the FAI training pitches, the GAA’s National Games Development Centre, plus the Institute of Sport, amongst others, with Cricket Ireland also opening a new training facility later this year.

“This is totemic,” said Minister for Transport, Tourism Sport, Shane Ross, “a symbol of the success in Irish sport in recent years, which we all very proud of. I think it’s phenomenal obviously for sport, and it’s phenomenal for the country.

“And I think the important thing is that it’s not just open to the big battalions of Irish sport, the big beasts, but it’s open to the public, and it’s open to individuals who are keen on sport, to spectators. I think we got quite good value on it.”

“The next part provides a hurdle, in terms of cost,” said Ross, “and we’re looking at various ways of funding that, and Sport Ireland are looking at ways of selling from land, and maybe borrowing from that. But as the Taoiseach said we’re looking at ways of funding it through the capital review, and it will obviously be one of the competing projects for that. But I’m not going to be a hostage to fortune on that, because funds are obviously short, but we’ll do as much as we can to encourage it.”

David Conway, director of Sport Ireland National Sports Campus, spoke about its importance in both “the community and commercial sense”, because it is expected to bring in revenue, and well as providing the required sporting facilities. The indoor running track, when levelled, can be replaced by up to 5,000 seats, the walls also sealed with acoustics boards to ensure the best possible sound.

All of which leaves it ready to make some real noise.