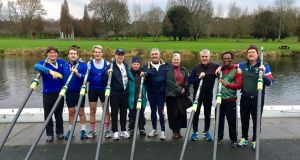 The firm message from the Irish Indoor Championships is that there is plenty of talent beyond the Olympic silver medallists, Gary and Paul O’Donovan.

Sam McKeown, the new Irish indoor record holder, is 22. Daire Lynch, the ever-improving under-23 athlete, is 18, as is Emily Hegarty.

Irish rowing faces into a few important weeks, not least because the international programme will soon discover what funding it will receive for the year.

Ireland has the makings of a good men’s lightweight four, but by the time of the trial it looks likely that boat will be gone from the Olympic programme.

The council of the governing body of rowing, Fisa, has weighed in strongly behind a proposal to remove it and replace it with a women’s four.

Fisa member federations vote at an extraordinary congress in Tokyo on February 10th and 11th.

The Fisa council, in a circular this week, says that the International Olympic Committee would not take kindly to other proposed moves which would keep the lightweight four or introduce a women’s lightweight four. Their judgment is that the IOC might take the chance to eliminate lightweight rowing events completely.

Three of Ireland’s top internationals have organised a new charity event, which takes place at the National Rowing Centre on Sunday.

The Run to Row will raise funds for Pieta House, the charity which deals with people have suicidal ideation or who self-harm. There are prizes for families and for individuals who take part.

Irish internationals Shane O’Driscoll, Mark O’Donovan and Sanita Puspure are behind the drive and Paul and Gary O’Donovan have donated signed rowing gear.

Two crews, Latitude 35 and Row for James, both fours, outpaced the field and have already finished, but the Galway solo oarsman defied predictions to carve out a lead over nine crews, most with multiple rowers.

Hennigan has taken calls from the winning boats to acknowledge his remarkable progress and offer support. So far, only the three-man crew of American Oarsmen have reeled him in.

“I’m focused on controlling the controllables,” Hennigan said. “I know about American Oarsmen, but I can’t do anything about what they’re doing. I can only focus on rowing my boat and pushing myself to the limit to get to [the finish in] Antigua as fast as I possibly can.”

Eamonn Colclough has joined Kieran Kerr in putting his name forward for the presidency of Rowing Ireland. The founder member of Tribesmen Rowing Club and Connacht vice president of Rowing Ireland has an extensive career in rowing – he started out with Commercial and also rowed for Neptune – and in his professional life.

He served as an officer in the army and had 13 tours of duty abroad, allowing him to row with Red Star Belgrade for a season. He is retired and active: he has just been conferred with a PhD in Philosophy, specialising in Peace Studies.

The deadline for nominations for election of officers to the RI board is March 4th.

Colclough is the Rowing Ireland liaison for the Lough Rynn course, which will hold a full-status regatta on May 13th. A new slip has been added, which will greatly aid circulation patterns.

Sean Drea hosted an interesting group of rowers in recent weeks, including Prince Albert of Monaco and his first cousin JB Kelly. They rowed at Islandbridge in an Old Collegians eight.