Mario Rosenstock: Federer-Nadal could be Nureyev and Fonteyn dancing for last time

The Swiss genius is like a comic book hero, lifting mountains with one hand 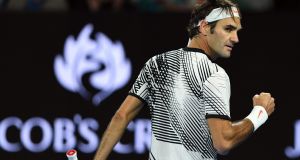 “I also have to say, my man-crush on Roger grows. He’s much better looking as the years have passed.” Photograph: Lukas Coch/EPA

For me, part of watching Roger Federer is watching a beautiful thing happening. You are watching living history. If you can understand that, you are watching something that is monumental, the final unveiling of Roger at his best.

Maybe we are reaching the end now and the idea that Rafael Nadal might be playing him in the final is just incredible.

But I feel a sense of joy for Federer, that he has rediscovered his imperiousness at such a late stage in his career. I love the ease with which he carries the brilliance on his shoulders and very few champions in the past have carried it with such lightness.

It doesn’t seem to be a burden on him, how brilliant he is and he doesn’t mind answering questions about that. The other day at the press conference in Australia somebody asked him “how do you keep doing it?” And he has this absolutely beautiful moment of candour, almost like someone with Asperger’s.

It was like Leonardo Da Vinci saying that he was fairly handy with a brush. It was brilliant.

Only two players, Maradona and Federer, no matter how much you watch them, they still manage to do something every time that you haven’t seen them do before. There is an extraordinary sense that they have the ability to make stuff up like a virtuoso.

I deal in comedy and satire and parody. One of the things I’m up against at the moment is people talking about alternative facts and fake news. We kind of wonder what the truth is.

Growing up, Keats was on my Leaving Cert English. One of the poems I loved was Ode on a Grecian Urn. It’s a lovely poem and the last few words are “Beauty is truth, truth beauty,that is all you know on earth, and all you need to know.”

That’s what I mean. He epitomises physical beauty in the way he plays and for anything we see that is beautiful in life we always feel there is a certain truth in it. It is an exposing of truth and that’s why people love sport.

In a world of greys where nothing is clear, sport is clear. Sport defines stuff. We get winners and losers, villains and heroes. We get beautiful and ugly. He is the closest definition to beautiful as you can imagine playing any sport. Ali in his prime would have been a beautiful way to watch boxing. Definitely.

Roger also reminds me of a super hero in comic books. Real super heroes like Superman; even when he is under extreme pressure he never looks fully extended. If there is an avalanche or he has to lift up a mountain, he never looks like he is straining.

He lifts the mountain with one hand. He never sweats. That’s Federer: you never feel that he is fully, fully extended. You always feel there is something left in reserve.

That’s why when he fell at Wimbledon this year against Raonic everybody gasped. Nobody could understand it. It was almost religious, the fall. It was almost like Christ falling for the third time.

People had seen something they didn’t think could happen. They saw the super hero fall over and that isn’t in the script. You know what I mean, it was like Superman losing his great powers. There was something religious about it because everyone just stopped and thought what’s happening here, Roger fell over.

Fragility in us all

It was the way he fell. He fell like a human being. It exposed the fragility in us all because you basically go “if there is something fragile about Roger god help us all”. It becomes personal then.

I also have to say, from a metrosexual perspective, my man-crush on Roger grows. He’s much better looking as the years have passed. He’s more handsome. He used to be very goofy and almost unprepossessing with his blubbering and crying and his big nose. Now he’s much more of a style icon. He’s growing into looking like a super hero.

I was standing about 15 feet away from him in Dubai once. He was doing a TV interview. I considered going up to him and doing a fan thing but decided to leave him alone.

The thing I noticed about him was he looked much taller in real life. He’s 6ft 1in but he looks 6ft 3in or 6ft 4in. He’s really long. He was other-worldly. There are very few that have a body shape like him. He’s extremely slender, extremely long. Sinewy. Muscley. Even in sports clothing he is different. There is something other-worldly about his physical presence.

He’s like this thoroughbred. When he walks, its slow and languid. I’m sure it is similar to watching someone like Usain Bolt walking. They have this incredibly athletic gait and it’s different to most sportsmen.

Roger has found a key to unlocking the genius reasonably often. It’s kind of life-affirming. It’s kind of joyful to watch that in a 35-year-old.

If he plays Nadal in the final, it will be 10/1, 100/1 on that they will never meet again in the final of a major championship.

For me that would be like Nureyev and Margot Fonteyn dancing for the last time.

1 Gordon D’Arcy: Where is Ireland’s progress under David Nucifora?

Jürgen Klopp impressed with ‘top talent’ Caoimhin Kelleher 06:49
Gordon D’Arcy: Where is Ireland’s progress under David Nucifora? 06:00
Johnny Sexton hopeful he will play on until the next World Cup 06:00
Darragh Ó Sé: Managers have steered three contenders to a better place 06:00
Seán Moran: Waterford give hurling an underdog story of its own 07:09