Pyrobel Killester back in the big time in National Cup final 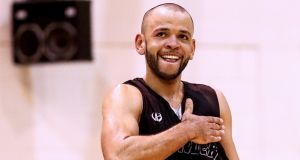 Griffith Swords Thunder’s Isaac Westbrooks will be hoping to lead his club to victory against Killester in the Men’s National Cup final at the NBA in Tallaght. Photograph: Tommy Dickson/Inpho

The last weekend of January is rolling around and that can only mean one thing – it’s Hula Hoops National Cup basketball finals time!

Eleven finals will tip off at the National Basketball Arena in Tallaght from Friday evening when the wheelchair final between Fr Mathews and NI Knights gets proceedings underway at 6pm. The games will run across the remainder of the weekend, with some very interesting match-ups in store.

The Men’s National Cup final at a sold-out arena on Saturday night tees up a much-anticipated clash between Pyrobel Killester and Griffith Swords Thunder. The last time these two sides met in the Super League was on New Year’s Eve, with Swords coming from behind in the fourth quarter to win by 21 points.

Swords are in their second cup final in-a-row, having been defeated at the death by Templeogue last year and will be relishing the challenge this weekend brings.

Isaac Westbrooks will be leading the charge from the point, but will need support from key players Jose Maria Gil Narbon, Justin Goldsborough, Kevin Lacey and Alex Dolenko to try and overcome an extremely determined Killester.

Killester meanwhile are looking forward to being back on the biggest stage in Irish basketball and will be hoping they can claim the ultimate crown to mark the club’s 50th anniversary celebrations this year. They will be looking to players such as Jermaine Turner, Cian Nihill, Peder Madsen and Ciarán Roe to bring their experience and skill to the fore.

The Women’s National Cup final features reigning cup holders Ambassador UCC Glanmire bidding to retain their crown as they seek to complete a famous four-in-a-row of cup wins (and their seventh success overall).

Glanmire have been dominating the women’s cup basketball scene in recent years, and Gráinne Dwyer, Áine McKenna and Claire Rockall will prove key for them this Sunday evening if they are to overcome Courtyard Liffey Celtics.

Some interesting games await in the Men’s Presidents Cup and Senior Women’s Cup too, as BFG Neptune – who have three finals to contest this weekend – will hope to have enough firepower to overcome Shane O’Meara’s charges at Ej Sligo All-Stars.

Marble City Hawks will need Kelly O’Hallahan and Katie Fox to be on form if they are to overcome Ulster Rockets on Sunday afternoon in the Women’s final.

There are a number of young talents to watch in the Under-18 and Under-20 finals as well, with young stars including Ali Cleary and Ash McCann of Pyrobel Killester, Anna Brennan, Nicole Clancy, Rachel Huijsdens, Maeve O’Séaghdha, Bronagh Power Cassidy and Elizabeth Black (DCU Mercy) and Annaliese Murphy, Louise Scannell and Jayne Fitzgerald (Ambassador UCC Glanmire) eager to make their mark.

In the Men’s underage finals, KUBS and Neptune face off against each other at both age groups, and Eoin McCann, Kevin Hughes, Marcus Black and Shane McCann (KUBS), Adam Drummond, Cian Heaphy, Adam Heaphy, David Murray and Sean Jenkins (BFG Neptune) will be looking to make a big impression on the games.

Some interesting tussles are in prospect too in the Men’s and Women’s NICC finals, with a very experienced Blue Demons taking on UCD Marian, while the clash of Michelle Aspell and Michelle Fahey in the Women’s NICC final as Limerick Celtics and Maree BC go head-to-head will be one to watch.

Session 3 tickets (Saturday evening) are now sold out, with Session 4 almost sold out as of 3pm on Thursday afternoon. Tickets for the games are available at www.eventbrite.ie.