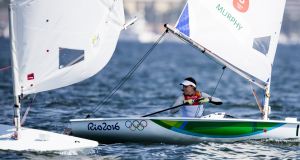 Annalise Murphy on her way to Olympic silver in Rio, the highlight of a packed 2016 sailing season that will be reviewed at the Sailor of the Year Awards

It was Ireland’s best Olympic sailing result for 32 years and it has already earned Annalise Murphy multiple national honours (including The Irish Times/Sport Ireland Sportswoman of the Year) and on Friday night, among her peers at the RDS, Dublin, the Olympic silver medalist is the clear frontrunner to win the top prize of the Irish Sailor of the Year Awards, a title she won previously after her London 2012 heartbreak.

The National Yacht Club helmswoman showed the depth of her ambition then by promising to go on and win after Weymouth’s near miss. She made good on that pledge in the Laser Radial in Rio last August to be Friday night’s stand-out performer in a year now described as Irish sailing’s greatest ever. It is so-called because 2016 not only delivered long-awaited Olympic success but also winners from the world of dinghy, offshore, cruising, power-boating and youth sailing.

Twenty-two sailors and pairings are shortlisted for the top prize at the RDS. Among these achievements, a GP14 world title was won by Shane MacCarthy in Barbados, Ireland entered the Vendee Globe thanks to Enda O’Coineen and mono and multihull round Ireland speed records were set.

In a scaled-up version of the Irish Sailing Association-organised ceremony, a gathering of over 300 are expected at the Volvo-sponsored awards from 6.30pm, but it is performances in the enduring single-handed Laser dinghy that continue to shine through.

Howth Yacht Club’s Ewan McMahon is tipped for Youth Sailor of the Year after his own silver-medal performance at the Laser Radial Youth World championships in Dun Laoghaire last July. McMahon went on to be Murphy’s pre-Olympic training partner in Rio.

Since it began 20 years ago, the Irish Sailor of the Year Awards has recognised over 320 monthly award winners. The first ever sailor of the year was also a Laser Dinghy exponent, Mark Lyttle, a race winner at the 1996 Atlanta Olympics.

One sailor who won’t make the RDS is Ireland’s youngest ever Olympic helmsman. Twenty-year-old Laser ace Finn Lynch found the going tough after four races sailed at this week’s Miami Olympic Classes regatta in Florida where he is the sole Irish competitor in the combined 450-boat regatta fleet.

Offshore, the Maxi Trimaran IDEC SPORT, skippered by Francis Joyon, shattered the outright round-the-world sailing record on Thursday by four days, 14 hours, 12 minutes and 23 seconds. The French crew won the Jules Verne Trophy when they completed the circumnavigation in a time of 40 days, 23 hours, 30 minutes and 30 seconds, at an average speed of 22.84 knots.

During this round-the-world voyage, they smashed no fewer than six intermediate records at Cape Leeuwin, off Tasmania, on the International Date Line, at Cape Horn, at the Equator and off Ushant.

On Saturday, Sail Training Ireland will hold their fifth annual prize-giving and season-launch event at the Mansion House, Dublin. The body will announce details of ‘The Voyage’, a 2017 Tall Ship initiative run between the cities of Dublin, Belfast and Liverpool.