Sailing column: Power-Smith’s lead in ISORA series to be tested on Saturday 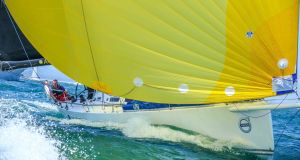 Chris Power-Smith’s Aurelia leads the ISORA fleet into race 11 this Saturday. It will start at 8am in Dún Laoghaire, and finish at Howth Yacht Club. Photograph: David O’Brien

Dún Laoghaire skipper Chris Power-Smith’s overall lead in the Irish Sea (ISORA) series will be tested on Saturday in a 60-mile offshore race, the 11th offshore contest of the season.

Defending ISORA champions Vicky Cox and Peter Dunlop sailing the J109 Mojito from north Wales are five points adrift on 487.7 points in second place with five races of the 2018 series still to navigate.

Since they last met on an ISORA startline, Aurelia and the Pwllheli champions have both notched up separate significant successes. Cox and Dunlop come to the line on the back of a class win at Cork Week a week ago. At the start of July, Power-Smith took third overall in a hard-fought Round Ireland Race, a 700-mile contest that saw the Welsh crew withdraw before the start.

Although ISORA still has one third to run, and the overall result remains wide open, the consistency of the top two so far means they are favourites for the Wolfs Head Trophy, ISORA’s top prize for the best six scores from 15 races that are scheduled to run until September.

Saturday’s race 11 will feature an 8am Dún Laoghaire start, and a finish at Howth Yacht Club for a race that looks like attracting a 20-boat fleet.

Unfortunately damage sustained in ISORA’s night race around Lambay Island a fortnight ago means seventh-placed Platinum Blonde (Paul Egan of the Royal St George Yacht Club) is out for the rest of the season, according to ISORA boss Peter Ryan. Also out for the remainder, also due to damage, is the Sun Odyssey 45.2 AJ Wanderlust from the Isle of Man.

Lough Ree Yacht Club is celebrating the success of an initiative to breathe new life into double-handed dinghy youth racing. Some 58 boats entered the Double Ree Regatta that as well as racing had an emphasis on putting the fun back into the junior regatta circuit.

An Irish Junior Optimist team has posted top results at the French National Championships. Fiachra McDonnell of the National Yacht Club won the event after a week of sailing. Fellow NYC sailor Clementine van Steenberge won the best girl at the event in Carcans, Bordeaux, that saw some 200 young sailors competing.