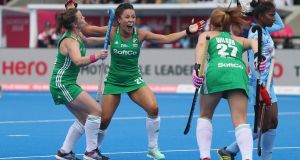 Anna O’Flanagan’s 64th international goal sent Irish hockey into delirium as they became the first side to reach the World Cup quarter-finals in London yesterday afternoon.

And now the mad-dash for flights next Thursday and a scramble for tickets to an event that is officially sold out begins with the growing Green Army support getting at least one extra day out in Lee Valley.

Defender Shirley McCay joked afterwards that she would need to ask her bosses at Ulster hockey - with whom she works as a talent coach - for some extra time off, a nod to the extent of pre-tournament expectations, perhaps.

It may have lacked the polish of Saturday night’s 3-1 win over the USA, this was one for grit and determination, forged from the pain of so many near misses in the last few years.

Captain Katie Mullan cut a relaxed figure at the coin toss with a beaming smile but it belied a far nervier start than Ireland had made last weekend.

India burst out of the blocks with Rani Rampal dictating proceedings, looking a million miles from the side Ireland beat 368 days earlier to qualify for this stage. Errors under pressure around the back were frequent and it required some swift running off the line from O’Flanagan to charge down a dangerous penalty corner chance.

And yet, out of not much, the Green Army nicked a corner from Mullan’s burrowing around the flick spot, digging out the ball onto a foot. McCay - who has intimated she will retire after this tournament - applied the pace from the set piece and O’Flanagan’s touch took the ball into the top corner, 1-0 after 13 minutes.

It was her 64th international goal, one off the Irish record.

India kept coming, though, with two further corner shots causing heart flutters, Hannah Matthews brilliantly tipping around the post while Ayeisha McFerran coolly dealt with a volley of shots, retaining the fragile lead into the break.

The third quarter provided more of the same, scramble defence required time and again as India ran up the set-piece count but found it hard to make their shots reach the goalkeeper.

It got more ragged in the closing quarter as the likes of McCay and Ali Meeke got stuck in while Yvonne O’Byrne put in the block of the game from India’s seventh penalty corner as the game ticked into the last five minutes.

Vandana Katariya did get clean through after a mix up in the Irish defence but was blocked once more by McFerran and from then Ireland played out the last two minutes smartly, holding the ball to ease the tension, the final whistle leading to an explosion of elation in the stands.

They roll on now for a game against England on Sunday evening, another special occasion with the pressure off in front of over 10,000 fans.

“When we saw the draw, England in England in a World Cup, post winning a gold medal in Rio, we were delighted,” coach Graham Shaw said afterwards. “We can really enjoy that atmosphere. There’s maybe a little pressure on them, none on us. We want to perform well and continue on this run. It’s a dream come true for these girls to play in front of a crowd of that size and I am really looking forward to it.”