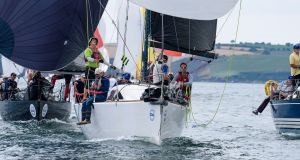 Entry has opened for what is expected to be a bumper Cork Week 2020 regatta next July to celebrate Royal Cork Yacht Club’s tricentenary Photo: Bob Bateman

Two separate announcements by royal yacht clubs this week herald a bumper 24 months of yacht racing for the south coast of Ireland as Cork Week Regatta 2020 opened for entry and the famous Fastnet Race changes course for 2021.

The Royal Ocean Racing Club (RORC) in London announced on Tuesday that Cherbourg in Northern France will host the finish of its Rolex Fastnet Race for the 2021 and 2023 editions. The biennial fixture that starts from Cowes on the Isle of Wight crosses the Celtic Sea and rounds the Fastnet Rock off the County Cork coast.

RORC say the move encourages and secures the future development of the now 690-mile race and will open it to more competitors; in 2019 the race had a record fleet of 300 and a waiting list of 150 boats.

French boats have won three of the last four editions of the race since 2013 and are world leaders in offshore sailing.

Rumours of the move to Cherbourg due to lack of space at the Fastnet Race’s traditional finish port in Plymouth first surfaced a year ago. The new course will be 90 nautical miles longer, and RORC says there is no decision yet on whether or not the race will run before or after the critical Cowes Week Regatta in 2021.

In making the announcement, RORC Commodore Steven Anderson said he would consider returning to Plymouth for 2025 for the 100th edition of the race if marina facilities can be extended.

The biennial regatta week has extra significance next year as it forms a vital part of the Royal Cork’s historic ‘Cork300’ celebrations marking what is claimed to be the oldest yacht club in the world’s tricentenary.

The first entry is an appropriate classic and will most likely be one of the oldest boats competing. Thalia, built in 1888, was first raced from the Royal Cork Yacht Club, moving to the south coast of England in 1918. After a more recent stint in the Caribbean, she was bought by David Aisher in 2010 and returns to Crosshaven for an important homecoming.

As a bonus to the week, all qualifying boats will automatically be entered into the Irish Cruiser Racing Association (ICRA) National Championships, that runs concurrently with Cork.

But perhaps the biggest fleet of all sailing to Cork Harbour next season may be the RORC’s Morgan Cup race fleet which will cross the Celtic Sea to Cork for the first time ever with the support of the Royal Yacht Squadron and RCYC.

This 324nm race will carry an attractive points-weighting for the 2020 RORC Season Points Championship so is expected to attract a substantial fleet. The line honours winner for this race will be the first recipient of a specially commissioned perpetual trophy donated to RCYC by his royal highnes, the Prince of Wales.

At the same time, a fleet will also set sail on an 800nm race from Heligoland, Germany, to Cork, Ireland, on July 4th competing for the Robbe and Berking German Offshore Trophy, arriving in Ireland for Cork Week.

Meanwhile, the historic ‘Kingstown to Queenstown’ feeder race from Dun Laoghaire to Cobh will take place on July 9th, enhancing the build-up to Volvo Cork Week 2020 with a re-enactment of what is acknowledged as the first-ever offshore race to take place in the British Isles, in 1860.