A golden year in the life: Sonia O’Sullivan’s unrivalled run of 1995 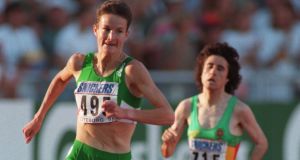 Sonia O’Sullivan kicks for home ahead of Portugal’s Fernanda Ribeiro on her way to winning the 5,000m final at the World Championships at the Ullevi stadium in Gothenburg. Photograph: Clive Brunskill/Allsport

Where to begin? A gangly teenager winning her first Irish senior title; chasing a bronze medal in her first Olympics; European champion in Helsinki; on the shoulder of Ribeiro in Gothenburg about to strike World Championship gold; neck and neck with Szabo down the homestretch in Sydney.

Impossible as it is to select any standout moment, in a career which spanned three decades and more races than anyone can remember, it’s at least easier to find the standout year in the running life of Sonia O’Sullivan.

Because across any sport or event, in all the time before or since, no Irish athlete enjoyed a more dreamlike year than O’Sullivan did in 1995.

Unbeatable? Not quite, but as good as. Beginning with her first race of that year, a 1500m in Brisbane on February 4th, and finishing with an 800m in Johannesburg on September 24th, O’Sullivan ran 25 races, and won 23. In her only two defeats, she finished second.

In celebration of her 50th birthday on Thursday, and induction into the Athletics Ireland Hall of Fame, Irish athletics historian Pierce O’Callaghan has for the first time compiled the entire list of O’Sullivan’s competitive races, records and championship success. No Irish athlete has run, or won, more, and 1995 remains the prime example why.

It was the year of the World Athletics Championships in Gothenburg and her 5,000 metres gold medal run inside the Ullevi Stadium was an exercise in perfection. At the previous World Championships, in Stuttgart in 1993, O’Sullivan was run out of the 3,000m medals by a trio of Chinese women (none of whom ever appeared on the international stage again), although O’Sullivan did manage to split them in the 1,500m, winning the silver medal behind Liu Dong (who also soon disappeared).

No one could say with absolute authority whether or not the Chinese would show up in Gothenburg, although O’Sullivan doesn’t remember being particularly worried about that. At age 25 she was in her absolute prime and her only worry was whether to run the 1,500m, the 5,000m, or indeed try to run both.

In the end, O’Sullivan chose the 5000m, and, after easily winning her heat on August 10th she kicked clear of Portugal’s Fernanda Ribeiro in the final two days later, to win the world title in 14:46.47.

For the fourth year in a row, she also won the IAAF Grand Prix Final in 1995, this time over 3000m in Monte Carlo. She was somehow denied the IAAF women’s athlete of 1995 by American sprinter Gwen Torrence, but Track and Field News magazine, the Bible of the sport, made her sure she got their award, unquestionably the leading women’s athlete on the planet.

Among her victories was the only sub-4 minute 1500m time recorded during the year, a new Irish record of 3:58.85 set at the Herculis meet in Monte Carlo on July 25th. Her only two defeats came over the 800m and 1,500: In Gateshead in England, at the Grand Prix 2 meeting, she finished second to Britain’s Kelly Holmes, out-kicked over the final metres; her only other loss was in her last race in Johannesburg, over 800m, where world champion Maria Mutola also beat her into second place.

In a career that spanned three decades, beginning with the cross-country season of 1985, and finishing, arguably, with the Dublin Marathon in 2015, where she ran 3:03.39, the 1995 statistics still make for unique reading. Not that she’s stopped running at age 50.

1 Klopp to rest Lallana to ensure he remains fit for transfer
2 Tipping Point: DeChambeau’s transformation raises questions, but who will ask them?
3 Game Changers: Vincent O’Brien, a pioneer who took Irish racing to the world
4 Tuilagi case shows England’s home-based clause is out of date
5 Pete Sampras: The forgotten great with the best serve in the business
Real news has value SUBSCRIBE