Pembroke Wanderers will aim to remain in pole position

Women’s Hockey League: Pegasus return to Dublin after defeat to Loreto for testing game against UCD 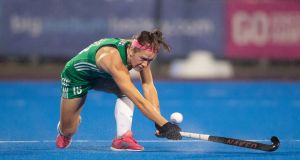 Belfast Harlequins may well be without Bethany Barr who has been struggling with a back problem. Photograph: Morgan Treacy/Inpho

It’s early days yet in the Hockey League, with each club having played just the four games, but so far it’s been healthily competitive with only two points separating the top five teams – at the same stage last season that gap was six.

Pembroke Wanderers lead the way on goal difference from Pegasus and Old Alexandra and with a home game against bottom club Belfast Harlequins on Saturday they’ll be hopeful of retaining their position. Ireland’s Lizzie Colvin could, though, be back in action for Harlequins after taking time out for her wedding and honeymoon, although the Belfast side might be without her international team-mate Bethany Barr who has been struggling with a back problem.

A week after dropping their first points of the campaign in a 3-2 defeat to Loreto, Pegasus return to Dublin for another testing game, UCD their opponents this time around. Alexandra, meanwhile, host Loreto in an attractive looking fixture that could feature up to five of the Irish team.

Both Munster clubs are in Dublin this weekend, Catholic Institute taking on Railway Union while Cork Harlequins are away to Muckross with both sides looking for their first win of the campaign.

Stephen Kenny: Ireland reaching the Euros would be ‘extraordinary’ 15:33
Ben Youngs pens a new deal with Leicester 12:05
Solskjær says United’s unbeaten run is ‘nowhere near’ enough 11:53
Eric Dier given four-game ban for confronting fan in the stands 10:59
A glimpse of rugby’s future; assessing Herbert Chapman’s impact on soccer 07:15
Here is your handy guide to sport on television this week