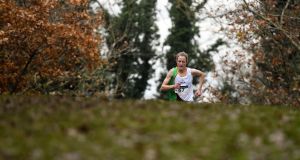 Fionnuala McCormack will further extend her record number of appearances in Irish women’s athletics by leading the senior team into the European Cross-Country championships in Lisbon, Portugal on Sunday week.

After running away – and the term is justified – with her ninth Irish title in Abbotstown on Sunday, McCormack promptly declared her intent to have another crack at the European title she won twice, as the first back-to-back women’s winner, in 2011 and 2012. She also finished fourth in her last attempt in 2015, leading the Irish women to bronze medals.

After younger sister Una Britton also wrote her own little piece of history on Sunday, finishing third to make them the first siblings to share the same podium in a senior women’s cross country event, she too is rewarded with her place on the Irish team for Lisbon.

Ciara Mageean didn’t attempt to defend her title on Sunday, given she was not long back after a break from the World Championships in Doha, where she finished 10th in the 1,500m final in a best of 4:00.15, but is also included on team for Lisbon. No joy for Sarah Healy, however, the under-20 medal contender who has withdrawn her interest as she recovers from the effects of a virus.

Also included is Aoibhe Richardson from Kilkenny City Harriers AC, coached by her parents and former internationals Noel and Niamh Richardson, who proved her form at the weekend when finishing 19th in the elite US NCAA Cross-Country, running for the University of San Francisco.

Liam Brady from Tullamore Harriers will lead the senior men’s team fresh from winning his first senior men’s title on Sunday, with Seam Tobin also back in form after finishing 10th best in European last year. Brian Fay will lead the Under-23 team along with another US-based athlete Peter Lynch, who finished 13th in the NCAA event for Tulsa University, with Maeve Gallagher from Swinford AC part of the women’s under-20 team having already represented Ireland in cycling and triathlon this year.

Plus one more TBC