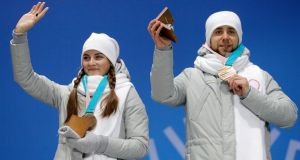 A Russian athlete who won a bronze medal in curling at the Winter Olympics here has failed a preliminary doping test, putting in jeopardy his medal and Russia’s efforts to move past a vast, state-backed cheating scheme that left it nominally barred from the games.

The athlete, Alexander Krushelnytsky, who competed in mixed doubles curling with his wife, is the first athlete from Russia to come under investigation for using a banned substance in Pyeongchang. Traces of meldonium, a heart medicine that increases blood flow and has been banned from most sports since 2016, were found in a routine urine sample. A second test will be conducted to confirm the finding, according to a statement from an organisation representing the Olympic Athletes from Russia, the designation given to more than 160 Russian athletes who had been cleared to compete at the games under that name.

Just one other athlete - Japanese short-track speedskater Kei Saito - has failed a doping test at these games. He tested positive for the masking agent acetalozamide in an out-of-competition doping test on the day of his arrival.

The timing could not be worse for Russia. The nation was barred from the Olympics in December after an investigation into a state-backed doping program that corrupted the 2014 Winter Olympics it hosted in Sochi. Scores of athletes, coaches and officials tainted by the scandal have been barred, though the International Olympic Committee has been considering allowing the Russian athletes to march under their national flag and uniforms for the closing ceremony, which they were not permitted to do during the opening ceremony.

The Olympic anthem will be played instead of Russia’s national anthem for any winners of gold medals, although no Russians have won so far.

The Russians allowed to participate in South Korea were subjected to what Olympics officials described as a rigorous testing regimen, and have found themselves under scrutiny from testers as the event has progressed. “On the one hand it is extremely disappointing when prohibited substances might have been used, but on the other hand it shows the effectiveness of the anti-doping system at the games which protects the rights of all the clean athletes,” the International Olympic Committee said in a statement on Sunday.

Meldonium caused confusion among Russian athletes when it was added to the list of banned substances by the World Anti-Doping Agency as scores of athletes, including former five-time Grand Slam tennis champion Maria Sharapova, tested positive for it. The anti-doping agency eventually ruled that more research was required to understand how long the substance, known as mildronite in Russia, remained in the system, as some athletes claimed they had taken it before the ban had come into force.

Many of the athletes involved, though not Sharapova, eventually had their suspensions lifted because it was not clear when they had taken the substance.

Krushelnytsky was part of the mixed doubles team that won a bronze medal earlier this week, a rare bright spot for the depleted Russian team, which has struggled without some of its top stars. In the curling event, he appeared to do most of the pair’s sweeping. They defeated Kristin Skaslin and Magnus Nedregotten of Norway in the bronze medal match, 8-4.

The Russians actually had a chance to win their semi-final against Switzerland, but Krushelnytsky badly overshot a target his final shot of the match, and Switzerland advanced to the final, where they were defeated by Canada.