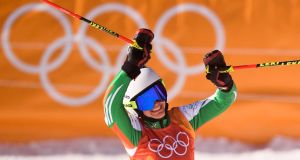 After their Winter Olympics debuts were put on ice due to bad weather, Team Ireland's Tess Arbez and Patrick McMillan finally made their Pyeongchang bow on Thursday morning.

McMillan, 26, earned a 50th place finish in the Downhill skiing - his time of 1.49.98 just nine seconds off the pace set by gold medallist Aksel Lund Svindal.

Meanwhile a daring second run in the Giant Slalom saw Arbez finish four seconds faster than her first, to move up six places to finish 50th overall from a field of 79.

After his run, Clare’s McMillan said: “This feels great. Today I achieved one of my top goals in life, to ski in an Olympic Downhill and finish it and make a lot of people proud. I’m sure everyone at home enjoyed it. My mum and father will be very happy.

“But the boys who won it are all in their mid-30s. They have 10 more years experience than me. I can gaurantee that in four or eight years time, when we’re back here again, I’ll also have that experience and make a great result.

“When you put your mind to it you can do anything. Five years ago I said I wanted to become a skier and then go to the Olympics and now I’ve achieved that goal. You should never give up.”

20-year-old Arbez needed to complete her first run in the Giant Slalom in order to qualify for a second, and she held her nerve to record a time of 1.22.12 - while 11 other competitors crashed out of the competition.

And she showed no fear on an aggressive second run which was a full four seconds faster, as she crossed the line 1.18.12, huge improvement which jumped her six places to finish in the top 50 with a combined total of 2:40.24.

She said: “Everything is just perfect. The weather was amazing, my parents and my family were over there shouting for me and I cannot believe it!

“I’m really happy to be there. I decided I cannot be sad if I made a mistake or something, to just have fun!”

Arbez was only the seventh Irishwoman to compete in a Winter Olympics and McMillan was only the second Irishman to ever take part in the Olympic Downhill.