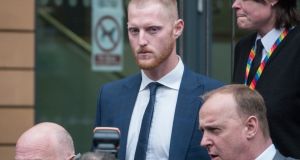 England cricketer Ben Stokes has been charged with affray over an incident outside a Bristol night club late last year, he has not played for England since being arrested in September. Photograph: Matt Cardy/Getty Images

Trevor Bayliss has welcomed the return of Ben Stokes but confirmed he is unlikely to play in England’s first ODI of the New Zealand series.

He has been practising over the winter but the all-rounder’s last competitive match was on December 22nd in New Zealand’s domestic T20 competition for Canterbury against Central Districts.

Stokes will be tried for affray after indicating he will plead not guilty to the charge after an incident outside a Bristol nightclub in September. In a statement released on Tuesday the ECB backed Stokes’ decision to defend himself in court and confirmed he will not be required to return to the UK for the first hearing at Bristol Crown Court on March 12th.

The date falls after the fifth and final ODI on 10 March, during preparations for the first Test which begins on March 22nd.

The rest of the ODI squad not taking part in the trans-Tasman tri-series will arrive on February 18th but Stokes will join the T20 squad in Hamilton on Friday. Given the scale of travel involved – Stokes will leave England on Wednesday – the usual protocol is to give players a day or two off to avoid injury.

Accordingly Bayliss, the England coach, says Stokes will not play in the T20 on Sunday against New Zealand and is doubtful for the first ODI against them on February 25th.

“He hasn’t played for a while,” said Bayliss. “It is not as if we can maybe bring him straight back for these T20s, for example. We have got to get him up to speed and hopefully during this one-day series we can get him back into the team.

“At this stage I’d have to say it was unlikely [he’ll play the first ODI]. We’ll have to wait and see how he is with travel, with practice. The reason we are getting him out as soon as we can is that we can get him up to speed so he is available for selection as early as possible.”

“Knowing Stokesy, he trains harder than anyone else. It’ll just be something we have to keep an eye on as the practice days go. That’s the idea – to try and get him out here before some of the other one-day boys so that he can have an extra few days.”

While Stokes’ absence was not necessarily felt during the 4-1 ODI series win against Australia, that success has been sandwiched by a 4-0 defeat in the Ashes and three consecutive Twenty20 failures, with two losses to Australia and on Tuesday against New Zealand.

His absence has been felt across the board – in red- and white-ball, and all three facets of the game. His mere presence, says Bayliss, will be a boost to those around him and the dynamic of the teams.”

“To me, apart from the way he plays, he’s a quality batter and bowler and our best fielder and one of the leaders in our squad. I think one of the biggest things we’ve missed over the summer has been the combinations we’ve been able to play.

“Right throughout the summer we’ve been down to five bowlers, especially in the one-dayers and T20s.

“We’ve been able to have six bowlers before, which gives the captain plenty of different options. I think that’s what we’ve missed the most apart from his individual performances.”

New Zealand offers a less febrile setting for a return than Australia but the chance to get back on the field, Bayliss feels, will be relief enough for Stokes.

“There’s been players in the past who’ve had off-field issues and are able to put that aside and concentrate on cricket. Ben is one of those types of guys but only time will tell. I’ve got a feeling he will be one of the guys.”