Cowboy the first stop on McGregor’s road to sporting redemption

Dubliner has everything to lose, but little to gain other than re-establishing himself 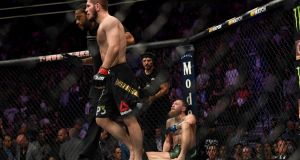 Having seemingly hit the bottom when he surrendered to Khabib Nurmagomedov 15 months ago, Conor McGregor’s road to sporting redemption begins in Las Vegas on Saturday night, but even a win will not get him all the way to his destination.

At best, beating Donald “Cowboy” Cerrone will be the first milestone on that path, but only time will tell if the new, calmer and more focused McGregor is here to stay.

There have been very few occasions during his UFC tenure that McGregor has displayed any humility or respect during his public appearances, but the 31-year-old has cut a different figure ahead of Saturday’s welterweight showdown at the T-Mobile Arena.

“I made a promise to my fans, to my team and my people that I would abstain [from alcohol] and stay focused and give it my all, and I’ve done that,” he told a press conference at the Palms Casino Resort, in Las Vegas, on Wednesday.

Gone is the partying, for the time being at least, replaced by the obsessed student of combat sports that he was as he made his way to the top and became one of the most famous figures in America.

“I’ve had so many amazing moments here. My life has changed here in America. I’m very grateful for this country and very honoured to be here and perform for the people. To come here and entertain these people is something that gets me up in the morning,” he told reporters.

A recurring theme of the former two-weight UFC champion was that he had turned over a new leaf and was “in a good spot”. The dark place he spent much of the last 15 months in was not mentioned, and any attempt to bring it up at the press conference was shouted down. After all, this is Las Vegas, Sin City, home of the fight game, and the only redemption song here is the ringing of the tills.

As McGregor sat atop the fence, a belt over each shoulder, there were no more MMA worlds left to conquer, and it was from there that it all started to go downhill.

His next visit to the Big Apple on UFC business ended in a brawl in which he threw a luggage trolley through a bus window at Nurmagomedov, and a subsequent conviction.

His boxing match against Floyd Mayweather was as lucrative as it was ridiculous in sporting terms, but having fattened his bank account, McGregor still emerged as a winner.

An unprovoked assault in a pub on a man who refused a tot of his whiskey resulted in a guilty plea in a Dublin court, and the conviction for the New York incident raised serious questions over his ability to enter the United States to continue his career.

His life outside the octagon seemed to be in tatters – then came the announcement of the fight against Cerrone, and things changed quickly.

Many troubled athletes find their way to combat sports because it provides the discipline and framework they need to bring order to a chaotic existence.

McGregor’s boundless energy was originally well-harnessed by his coaches and those around him, but as his fame, wealth and power grew, fewer and fewer were seemingly prepared to say the one word we all need to hear on occasion – “no”.

He has undeniably achieved things in combat sports that had never been achieved before – the stunning knockout José Aldo, holding two belts at the same time, and cashing cheques of a size never before seen in the sport of cage fighting. In that light, it’s easy for him to believe that he has become a fighting Midas, and that everything he touches will turn to gold.

A disciplined performance and a trademark highlight-reel knockout within the first few rounds on Saturday will be the best McGregor can hope for as he attempts to reverse what he calls the “mad narrative” of his fall from grace with the general public that has been almost as sharp as his rise was spectacular.

He has everything to lose, but little to gain other than re-establishing himself as a fighter, rather than a celebrity with a nose for trouble.

While he would love to be adored in Ireland as he was just a few short years ago, it is America that really matters to McGregor, and luckily for him sports fans there have short memories.

Most don’t care about his appearances in the courthouse dock or the newspaper allegations; all they are interested in is what he will do next in the boxing ring or the octagon, and it takes a lot for an athlete of his stature and with his ability to generate revenue to become persona non grata in the sports and entertainment worlds here.

But so far in Las Vegas the buzz that surrounded his previous fights here, when young Irish fans wrapped themselves in Tricolours and made the pilgrimage to the desert to see him perform, is absent.

On Saturday night the talking stops and McGregor will step into the octagon knowing that he has to perform if he is to continue on his road to redemption.

If he loses, his options narrow considerably; he will still be able to command big money for a rematch with Nate Diaz or a lucrative boxing match against Manny Pacquiao, but above all he will want to win back the respect of MMA fans and fighters, and to stay relevant in title discussions at lightweight and welterweight.

His opponent, Cerrone, is a perfect bellwether. Tough, vastly experienced and very well-rounded, Cerrone is the man the UFC send in when they want to test the mettle of a contender and entertain the fans.

Though he suffers against pressuring southpaws like McGregor and would be well advised to use his excellent grappling to subdue his opponent, he knows the fight game and understands his role.

Cerrone will enter the octagon with the intention of going toe to toe with McGregor, whatever the outcome. For him it’s about a well-earned payday as he enters the twilight of a career in which he made his money by putting on a show for the fans.

And if McGregor wishes to once again become the all-powerful sheriff ruling over the UFC, he will first have to see off the Cowboy.