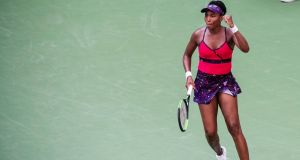 Venus Williams during her second round match against Camila Giorgi of Italy at the Louis Armstrong Stadium. Photograph: Karsten Moran/The New York Times

Serena and Venus Williams will go head-to-head for the 30th time on Friday after booking their spots in the third round of the US Open.

A potential clash between the sisters was the main talking point after the draw last week and neither looked like wobbling on Tuesday, with Venus defeating Camila Giorgi 6-4 7-5 before Serena saw off Carina Witthoeft 6-2 6-2 in the night session.

It will be the 16th time Venus and Serena have met at a slam, but the earliest stage of a tournament since their very first match in the second round of the Australian Open 20 years ago.

Their last slam clash was in the final of the Australian Open in 2017, when Serena was in the early stages of pregnancy with daughter Olympia.

Venus said: “The last time we played at the Australian Open it was two against one, so at least this time it will be fair.”

Venus won their most recent meeting at Indian Wells in March during Serena’s first tournament back, but the 36-year-old showed how much sharper she has got since then.

The Wimbledon finalist said: “It’s obviously a tough match. It’s so young in the tournament. It’s not the end of the world. We would have rather met later but we’re both going to come out per usual and do our best.

“We make each other better. We bring out the best when we play each other.

I think we’re used to it now.

“I never root against her, no matter what. So I think that’s the toughest part for me. When you always want someone to win, to have to beat them. I know it’s the same thing for her.”

Another blockbuster clash will see defending champion Sloane Stephens take on former world number one Victoria Azarenka, who has found her form in New York.

The Belarusian is playing at Flushing Meadows for the first time in three years, having missed 2015 while she was pregnant with son Leo and then last year because of a custody dispute that limited her travel.

Since a run to the semi-finals in Miami in March, when she was beaten by Stephens, Azarenka has played full-time on the tour but has struggled to find anything like the level that carried her to two Australian Open titles.

But the 29-year-old, whose ranking is languishing at 79, is feeling more positive now, saying: “I didn’t really enjoy myself because I feel like when you go through difficult times you sometimes have a very narrow focus on results only, and it’s hard to look outside of that.

“It didn’t bring me the joy of the journey, of experience. It really held me back from improving or transitioning from practice to match. It’s been really a struggle.

“If I look at the big picture and what I have been through and where I am now, it’s pretty significant. But it is not where I want to be. So that space sometimes seems really far.”

Stephens is defending a grand slam title for the first time and had to battle through her nerves and past qualifier Anhelina Kalinina, finding herself a set down and two games from defeat before turning things around to win 4-6 7-5 6-2.

“It was a tough day, obviously,” said the American. “She was playing really well, she’d played four matches already, she was used to the conditions.

“I just kind of had to weather the storm and wait for my opportunities. Obviously I wish I could have been playing a little bit better. That would have helped the situation. But I just found a way today, and sometimes it’s not going to be the best, but you’ve just got to battle through.”

With the clock having ticked past 1am, Czech qualifier Karolina Muchova knocked out 12th seed Garbine Muguruza, beating the former Wimbledon champion 3-6 6-4 6-4.