Rhiannon O’Donoghue and Molly Curry qualify for final in Tokyo 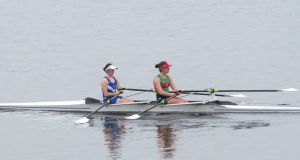 Ireland’s junior double scull of Rhiannon O’Donoghue and Molly Curry qualified for the A Final at the World Rowing Junior Championships in Tokyo on Saturday morning.

The Killorglin/Coleraine Grammar School crew took the third spot in their semi-final under pressure from Italy. The Netherlands won with a performance which was impressive by any standards: they were over three seconds clear of nearest rivals Lithuania at 500 metres and extended that lead down the course - they were 5.72 ahead of Lithuania crossing the finish line.

Ireland won the battle behind them for the third place which guaranteed a place in Sunday’s final. At first Belgium and Ireland fought it out. Ireland had taken a degree of control going into the final quarter, only to come under severe pressure from Italy. But it was O’Donoghue and Curry who produced the best last 500 metres to stay clear of Italy by 2.25 seconds.

China had dominated the first semi, with Germany second. Greece took third ahead of Britain, who did not qualify.

The Ireland double join the Ireland junior men’s coxed four which qualified for their final on Wednesday. Their final is at 2am, Irish time, on Sunday, while O’Donoghue and Curry will compete at 3.55am.