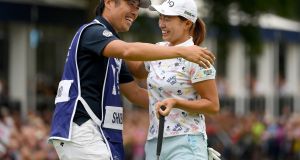 Hinako Shibuno of Japan and her caddie celebrate after the final round of the AIG Women’s British Open at Woburn. Photograph: Ross Kinnaird/Getty Images

Hinako Shibuno captured hearts and minds long before she decided to take delivery of the Women’s British Open trophy for good measure. The 20-year-old, who until this event had been outside her native Japan only once – that jaunt to Thailand did not even involve any golf – produced one of the most endearing storylines of this golfing year by holing out from 18ft to claim this title. Shibuno, nicknamed “the Smiling Cinderella”, shall indeed go to the ball. She was having one for four days.

Shibuno’s golf, which propelled her to 18 under par, was exemplary. Her infectious attitude proved a revelation; in the heat of battle, she was high-fiving spectators and waving to adoring galleries in a manner far from customary in a sport beset by rigidity. It felt altogether fitting that there was one perfect, marquee moment, delivered with the final putt of the tournament. Had the ball not banged into the back of the cup, it seemed destined to roll several feet past. Fear not, Cinderella. Shibuno’s back nine of 31 on her major championship debut afforded her a one-shot victory over Lizette Salas.

“I feel like I’m going to vomit,” said Shibuno in suggesting anxiety that was not at all apparent. “Contending at a tournament like this is nerve-racking but I was determined to enjoy it.”

Earlier, the sense prevailed that Shibuno was destined to fall short. She made a double bogey at the 3rd and played the front nine in 37. The inward half at Woburn’s Marquess Course was kind to Shibuno all week – she played it in a four-round total of minus 18.

As Shibuno celebrated, it was impossible not to feel sympathy for Salas. The American found herself an unwanted centre of attention at this tournament in 2015, owing to its hosting by Donald Trump’s Turnberry resort. Salas was bombarded by news outlets then and by her own admission felt desperately uncomfortable after the then-US president elect had made disparaging remarks about Mexicans. Salas, a US Solheim Cup player, is of Mexican descent.

Salas was on the verge of regarding the British Open in altogether different light. Playing two groups in front of Shibuno, she stood over a 5ft putt on the 18th green with the chance to move to 18 under. The birdie attempt remained above ground. Salas’s hopes of possible salvation via a play-off were ended by Shibuno’s subsequent brilliance. The roar as the Japanese converted reverberated to the practice putting green, where Salas was preparing for potential extra holes. These kind of defeats tend to linger, especially for a 30-year-old who is without a major title.

In tears, Salas admitted there was a “sting” as attached to what transpired. “I told myself: ‘You got this. You’re made for this,’” said Salas of her fateful moment. “I put a good stroke on it. I’m not going to lie. I was nervous. I haven’t been in that position in a long time. I gave it a good stroke, I controlled all my thoughts, it just didn’t drop. So congrats to our winner.”

On an engrossing final afternoon, Ko Jin-young flirted with the making of history. The Korean was seeking to become just the seventh player – male or female – to win three majors in a single calendar year. Ko could barely have given this a better run; her birdie putt at the 72nd hole stopped agonisingly short, meaning a 16-under-par total and third place after a 66. Ko and Salas, as Sunday playing partners, had a better-ball score of 12 under par, which was also the case inside 15 holes.

Morgan Pressel dropped a shot at the last to finish a shot and a place behind Ko. Pressel should have now done enough to earn a wildcard pick for what would be a sixth appearance for the US team at next month’s Solheim Cup. As Pressel challenged at the top here, her closest Solheim challengers had made a halfway exit. Ashleigh Buhai’s 70 left her fifth, one stroke adrift of Pressel at 14 under par.

Georgia Hall’s title defence concluded with a 73, meaning a share of 35th. With Hall essentially out of the championship equation before a ball was struck on Sunday, home hopes fell on Charley Hull and Bronte Law. A double-bogey seven at the 7th put paid to Hull’s aspirations, with her 76 contributing to a tie for 24th at five under. Law had not dropped a shot inside 54 holes but proceeded to ship five inside her front nine. A 78, her worst score of the week by eight shots, ensured she matched Hall’s three-under aggregate.

There was, however, one name – a new name – on everyone’s lips. Mainstream sport is all the better for delving into the land of fairytale now and again.