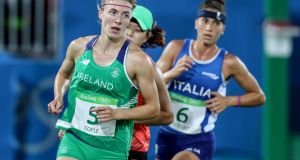 Natalya Coyle is in line to qualify for her third Olympic Games at the European Championships in Bath. Photograph: Dan Sheridan/Inpho

Natalya Coyle is within touching distance of her third Olympic Games after qualifying for the women’s individual final at the European Modern Pentathlon Championships in Bath, England.

The two-time Olympian will be accompanied in the women’s final by team-mate Sive Brassil, meaning Ireland still has three athletes in with a chance of securing their Olympic tickets this weekend.

Coyle, who finished in the top 10 at both London 2012 and Rio 2016, and Brassil will compete for one of eight women’s Tokyo 2020 qualification places on Sunday. Coyle scored 1,022 points in Friday’s semi-finals while Brassil went even better with 1,028.

A third Irish athlete, Eilidh Prise, fell short of the qualifying threshold with 982 points and won’t take part in the final of this year’s continental showpiece, having finished 11th in 2018.

Arthur Lanigan-O’Keeffe takes part in the men’s individual final on Saturday with the aim of also securing one of eight available places at Tokyo 2020.