Heat is on for Carolyn Hayes at Tokyo triathlon test event

Athlete faces hot and exhausting conditions, Japan’s latest heatwave a reminder of that 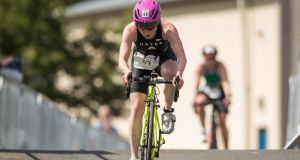 Carolyn Hayes: growing up in Limerick, she didn’t even know that the triathlon existed, and certainly never harboured any Olympic ambitions. Photograph: Ryan Byrne/Inpho

Some Olympic test events are mere dress rehearsals for what is to come. Others will test the waters in the more literal and revealing sense.

Next week’s triathlon test event in Tokyo is expected to deliver on both fronts. It will act out at the same time and under the same conditions the event being staged at the Olympics in August 2020, starting and finishing in Odaiba Marine Park in Tokyo Bay, an urban resort with white sandy beaches overlooked by high-rise waterfront buildings, and the setting for Japan’s National Triathlon Championships for more than 20 years.

After the 1.5km swim in Odaiba Bay, the race will head out on the 40km cycle around the Marine Park and leafy West Promenade district, before finishing with a 10km run in the same setting. As Olympic triathlon venues come it appears idyllic and iconic at the same time.

It will also be properly hot and exhausting, in and out of the water, Japan’s latest heatwave in high summer a reminder of that. It will also carry a warning: the Olympic swim-bike-run event may actually become a shortened swim before the bike-run, or possibly even just a bike-run.

That Carolyn Hayes finds herself on next week’s starting line is both a test and measure of how far she’s come in her triathlon career. As a fully qualified doctor, putting that career on hold last year in order to concentrate all her efforts on qualifying for Tokyo, she fully understands the challenge and risk the heat will present next Thursday and possibly next summer too, if she gets back there. Not that it’s in any way putting her off.

“Everything will be run exactly as it will be on the day of the Olympics,” she says, “and for me to get an invitation is huge, and hopefully another positive step towards Tokyo qualification. Especially with extra qualification points on offer.

“One difference though is that next year, if I do make it, I’ll have had about three weeks to acclimatise. This time I’ll have a few days. And they are already a bit worried about the swim. The water temperature is up around 26, 27 degrees, which is very hot. Once it goes above 22 degrees it becomes non-wetsuit.

“If the air temperature is also too hot, say 36, 37, coupled with the humidity, they may have to shorten to swim, or maybe even cancel it, and make it a duathlon. In extreme conditions like that the body can’t properly thermo-regulate itself, coming out of the water, and that carries the risk of heat exhaustion. That’s part of what the test event will be about, to simulate those conditions, and if they do need to make some call. And everyone is aware of that.”

The International Triathlon Union has also confirmed the start times will be brought forward, competitors can wear cooling vests until their official introduction, and coaches will be able to place cold or frozen water on to bikes; trained medical personnel will be stationed every 500m along the 10km run.

When the Olympics were last staged in Tokyo, in 1964, they ran from mid-October, to avoid the searing heat; next summer’s competition, featuring 33 sports and 339 events, takes place between July 24th and August 9th, and weather-related concerns have mounted, especially after a historic heatwave in Japan’s capital last summer, with an area near Tokyo seeing a record temperature of 41.1 degrees. Last week in Tokyo it hit a high of 38 degrees.

For Hayes this is all part of the Olympic experience she is now chasing with increasing intent and self-belief. Growing up in Limerick, she didn’t even know that the triathlon existed, and certainly never harboured any Olympic ambitions.

At age 31, she’s also still relatively new to the sport, first competing for purely fun reasons in 2013, only she’s fast gathered enough ranking points over the last year to put herself in contention for what is arguably one of the hardest Olympic events to qualify for – only the top 55 men and 55 women in the world invited back next August.

Her 2019 season began with a win in the Durban Premium African Cup, and she’s been around the world since – competing in Hong Kong, Korea, Senegal, Morocco, India, Zimbabwe and back home, her sixth-place finish at the European Championships in The Netherlands in June also giving her considerable momentum towards Tokyo.

“Since October 2018, my ITU Ranking has gone from 430th, up to 75th, so at the moment I’m in a good position. Olympic qualification is a two-year process, year one ran from May 2018 to May 2019, where you take your six best races, then carry those points into year two, and again count your six best races, by May 2020. But I think by February of next year I’ll have a good idea, that yes I’m, going to the Tokyo, or no, I’m probably not. I just need to keep doing what I’m doing.

Now, 11 Irish triathlon titles later, the reasons behind her progress over the last year are twofold: putting her medical career on hold, and moving to Wicklow to link with coaches Gavin Noble and Eanna McGrath, and their HupHup training group.

“I finished as a junior doctor in July last year, and moved to Wicklow to train full time. Since being there, and trusting the guys, all this has happened. Gavin also competed in the triathlon in London, I’m also living with a family in Greystones, Liam Williams, who also rowed for Ireland in the Olympics, and understand the stress and the demands.”

Her arrival on to the triathlon scene was mostly by accident. Swimming was her first sport, only for a shoulder injury to necessitate an operation: “So I took up running, really to ensure I didn’t get fat. Then I decided I’d do a marathon, in Dublin, ran 3:13, the first time, then ran New York.

“Then I was in Trinity doing my degree in physiology, and took up water polo, and made for the Irish team. The water polo still helps, because the swim in the triathlon, things can get a bit feisty in the water, all hunting for the same space.

“From there I went to the University of Limerick, started some cycling and running, and in 2014, after joining Limerick Triathlon Club, signed up for the Hell of the West, which is their home race, and that doubled as the National Championship.

“I didn’t really have a clue what I was letting myself in for. I remember my dad driving me down and saying is this the bike, run swim? And I said, no it’s the swim, bike run. I won that day, which was huge, and ended up that year winning the overall national series. It started out as something on the side in medicine, and turned out to this.

“The decision to go full time was in my head when working as a junior doctor in St James’s Hospital, two years ago I decided to defer for a year, join the guys in Wicklow, kept my options open with some locum work but as the goal became more realistic, I didn’t want to have any more regrets.

“The family support is huge as well. Most athletes will tell you, ‘I want to go to the Olympics’, but absolutely, I’m all in, and it is the most important thing for me at the minute. I did a lot of over-time as a junior doctor, and I’m eating into those savings, and I’m fortunate to have sponsors in Renault Ireland, and Specialized bikes. And sure the washing machine would be going 24/7 if you let it.