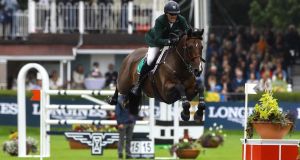 Ireland’s Paul O’Shea on Skara’ Glen’s Machu Picchu during the Nations Cup at the Dublin Horse Show at the RDS. Photograph: Lorraine O’Sullivan/Inpho

Persistent rain showers put a damper on Nations Cup day at the Dublin Horse Show at the RDS. The result of the main event left the home crowd a little downbeat too.

Ireland were in close contention for the Aga Khan trophy but could only finish third behind Great Britain and Italy.

Umbrellas, raincoats and bag packs were the order of the day for spectators, rather than the stilettos and sunglasses seen on Thursday for Ladies’ Day.

The McGlynn family from the Curragh, Co Kildare, were among those who withstood the downpours to see who would win what’s officially called the Longines FEI Jumping Nations Cup.

“We were here last year as well, it’s a great day out. Molly said it’s the highlight of her summer, she loved it,” Ms McGlynn said.

Kay Murphy (77) from Harold’s Cross, Dublin, has been coming to the horse show since she was seven years old.

“My uncle used to get the corporate tickets and we made it as a birthday outing and we would come to the jumping and have high tea on a low table on the grass.

“When I was a child my birthday was in the middle of the holidays so you couldn’t have a party so we would go to the horse show.”

Ms Murphy said she did horse-riding lessons on a farm in Tallaght when she was younger, though the site is now “under concrete and covered in houses”.

“When you got to around 14 or 15 it became much more serious for the boys, but the girls kind of faded off. They say it’s something to do with confidence, that younger men are more confident than girls. I don’t know the reason. A lot of my riding class would have been girls but the boys all stayed at it. We did something else.”

This year’s festival marks 100 years since women first competed at the show.

An RDS event earlier this week highlighted research showing a drop-off in the numbers of women riders taking part in RDS competitions, particularly at the higher levels, in the 10 years since 2008. Speaking at the time, Co Kildare-based trainer and rider Nicola FitzGibbon said: “It is an extremely mentally difficult sport to be in, and women suffer a lot more from impostor syndrome, they doubt themselves a lot more than men.”

Up to 100,000 people are expected to attend the RDS over the course of the show, which continues with the Land Rover Puissance on Saturday and the €350,000 Longines International Grand Prix of Ireland on Sunday.