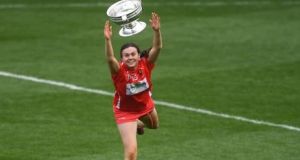 Dual status is something that used to be hailed and lauded in the good old days. From a Cork perspective it used to be quite literally a gift from the gods if you could play intercounty in both codes. As professionalism entered the fray in the GAA world, and as the dual stars turned into the endangered species you would hear David Attenborough describe so eloquently, ladies footballers and camogie players refused to stop.

Sure, some people can say the games were not at the same professional standard, but that was just nonsensical pub talk. The likes of Rena Buckley and Briege Corkery still put in an insane number of hours, irrespective of the standard. Equal game and equal effort and all that.

About a year we saw the endangered label enter the women’s game. Meabh Cahalane, Hannah Looney and Libby Coppinger fell victim to some bitter disputes, and had to watch statement after statement being released about them without them saying a word.

We all know the UCC vs Paudie Murray debacle, and how rumour had it certain people were told they would never play for Cork again. Then came the intercounty dual clashes of 2018.

I remember when the initial fixtures were released, and Cork footballers were due to play Donegal on August 18th in the All Ireland semi-final, and I met Cork manager Ephie Fitzgerald before their quarter-final v Westmeath.

“The only way this will be fixed is if they set egos aside and just become the one organisation.” Ephie does not mince his words was my mental note of the day.

Sure enough, the fixtures were changed, and Looney, Coppinger and Cahalane were spared culling, and dual status could live for another year.

But, surprise surprise, the issue has reared its ugly head once again in the form of Tipperary dual star Orla O’Dwyer.

Shane Ronayne’s footballers are scheduled to play Sligo in the All-Ireland intermediate semi-final in Nowlan Park, while the camogie team take on Kilkenny in their All-Ireland senior semi-final in LIT Gaelic Grounds, Limerick, on August 17th.

Once again it is leaving players in uncomfortable situations, and forcing them to choose in an awkward environment. How many more years will we see the repeat headlines over and over again? It has gone to the stage now where headline writers have a bunch of puns ready to use because dual clashes will rise again despite both the LGFA and Camogie Association saying it may not happen again.

Tipperary Ladies Football sought assurance this year after O’Dwyer was caught in a sticky league situation, and, bizarrely, it is them again who are calling for common sense to prevail.

I understand that there are broadcasting issues – even renting a stadium probably needs some notice – but Tipperary LGFA gave seven months’ notice. Were both organisations just watching Tipperary progress with their eyes closed, pretending if they don’t see it it won’t be it?

It’s not like both of these organisations have not moved games around before. I remember in 2016 the Camogie Association changed some fixtures around in 2016 to avoid clashes, their clashes being the 2016 Euros.

As sports fans we want to see the best of both codes out on the pitch, promoting the game well, and ensuring there are plenty of role models for everyone no matter the gender.

At a time where women in sport is rising, and the standard and demands of players go up, it is a crying shame these are the headlines being created and the stories the public are seeing more and more.

As well rounded athletes who are ridiculously talented, their compromising should not mean missing out on glory days with either team. O’Dwyer and those who have been there before her were never comfortable with their names splashed across papers as if they are the perpetrators of an inexcusable crime.

Maybe Ephie Fitzgerald is right, perhaps it is an ego thing and the sheer reluctance of both organisations to acknowledge it is a problem.

Maybe the players are too romantic in their thinking that they can be dual stars at a time where commitment to just one code is life-altering enough.

Could it also be possible that the supposed open lines of communications between both organisations are shut off when it comes to dealing with stakeholders that aren’t contributing to the cause that isn’t of financial benefit?

Irrespective of that we must ensure that our own house is right first before encouraging everyone to come in and have a gawk.

At a time where more eyes are on women’s sports and more time is being dedicated to promoting it, organisations must at the very least be aware of the skeletons that lie undisturbed in closets.