Resilient Mageean doesn’t need telling how hard it can be 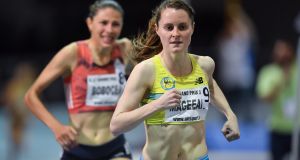 Ciara Mageean on her way to setting a new indoor Irish record in the TG4 Women’s 1,500m of 4:06.78sec during the AIT International Grand Prix. Photograph: Brendan Moran/Sportsfile 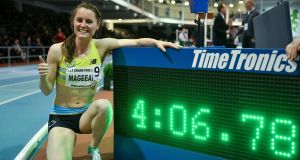 Life is what happens to you while you’re busy making other plans...

Not the most original intro, only something and everything about that line seems to get better with age. Maybe because some of us were too young to appreciate what John Lennon actually meant when he wrote it.

It’s the last verse in Beautiful Boy (Darling Boy), released one month before Lennon was shot in the back by a lone gunman trying to make a name for himself. The sentiment was sadly prophetic: the song, on the album Double Fantasy, was a sort of lullaby for his son Sean, aged five, and also had the line ‘I can hardly wait to see you come of age’. Only Lennon never did. That happens in life.

It’s not his original line either, appearing in various guises long before Lennon, probably traced back to 23BC, and what Horace phrased as carpe diem – usually translated as “seize the day”. What Horace originally meant is not so much “seize the day” as “enjoy the day”, qualified by the line that followed – quam minimum credula postero – or “trusting as little as possible in the next”; the day is there to be seized not because there is no future, but because there is no certainty in it – and that happens in sport as much as in life.

At least part of the disappointment surrounding Wednesday’s announcement that Declan Rice was switching his allegiance from the Republic of Ireland to England is the expectation he’s about to contribute to their international success, at the expense of our own. As well he might. Still only 20, Rice’s speedy progress at West Ham suggests as much, and there’s no denying his potential. Still Mick McCarthy’s brief farewell note, especially the “good luck to him”, was as much a gentle retort. As in life, a lot of international football comes down to luck.

It’s impossible to read anything about the Ireland rugby team right now without feeling suspended in permanent expectation about the Rugby World Cup. Nothing about the here and now appears to matter as much as the there and then, as if every breath that every player takes is on hold until the Far East in October. For some of the younger players, this might well be their time already, the “urgent insurgent now”, as DH Lawrence might say. At least part of what happens for them for the rest of the Six Nations should be about enjoying the day. They won’t all come of age.

There is often a similar state of expectation surrounding Irish athletes, that he (or she) not busy being born is busy dying. Especially when it comes to championship matters. Two weeks out from the European Indoors in Glasgow, Sunday’s national championships at the Sport Ireland Indoor Arena at Abbotstown will almost inevitably end with the one question: so who are the medal contenders?

It’s all perfectly fair, only sometimes what happens doesn’t go to plan. Such is life. No one knows or appreciates that better than Ciara Mageean, who going by her indoor season so far, might well be considered a strong medal contender for Glasgow. In fact she’s had her best indoor season to date so far, winning the 1,500m at the Athlone International Grand Prix on Wednesday while scoring an indoor hat-trick of sorts: a personal best, an Irish record and a stadium record. It set off a brilliant evening of athletics – duly captured live by TG4.

Mageean’s 4:06.76 improved her own Irish record of 4:08.55 set three years ago; last Friday in Madrid, she finished second in a world-class field in 4:10.12. This also follows her fine run at the New Balance Games in Boston last month, again improving her own Irish indoor mile record to 4:28.31.

At 26, Mageean is still running into her prime, and perhaps more than any Irish athlete since Sonia O’Sullvan has had the full run of emotions too, typically played out live on TV. A year ago, she missed out on the 1,500m final at the World Indoors in Birmingham; two years ago, she dropped out of the 1,500m final at the European Indoors in Belgrade, reduced to tears in the immediate aftermath. “I’m so frustrated right now, just frustrated in my head, I don’t even know what’s up,” she said. “I’m just very sorry for that performance there.”

As if she had to apologise, her similar mea culpa when falling short of the Olympic final in Rio a reminder that no one takes these disappointments to heart more than the athlete. Six weeks earlier, Mageean had won bronze in the European 1,500m in Amsterdam, only the third Irish woman to medal in the long history of those championships after O’Sullivan and Derval O’Rourke.

It’s 11 years now since she won her first Irish indoor senior title, at 15, over 1,500m, knocking two seconds off the Irish junior record. Since then she’s had to live with a few labels as well (whisper “the next Sonia”), and the problem with labels is they tend to stick. Growing up in Portaferry, at the tip of the Ards Peninsula, she’d begin her school days with an 8.15am ferry trip across Strangford Lough to catch the bus to Assumption Grammar, Ballynahinch.

There were tough lessons early on too. In October 2008 she travelled to Pune, India for her first major international event, the Commonwealth Youth Games. Fancied to medal in the 800m, Mageean ended up fifth, the entire field fairly stunned by the South African winner named Caster Semenya. Typical of Mageean she came out two days later and won bronze in the 1,500m.

Her senior elevation didn’t go exactly to plan. She chased in vain to qualify for the 2012 London Olympics, and by the following year had dropped off the scene completely, a bone spur in her heel necessitating surgery, then a long and lonely lay-off. Last August she bounced back again to finish a close fourth in the 1,500m at the European Championships in Berlin. “I can’t really say how that feels, but it’s something which rhymes with ‘uck’. . .”

Six months on, settled into a new training group in Manchester, there’s another layer of maturity about Mageean, as if realising all the planning in the world can’t always account for what happens in life. “It’s very hard for athletes,” she said in Athlone, “people always expect us to be winning, winning, winning, and anybody who goes through life knows it doesn’t go like that all the time.”