20x20 and Investec award a €1,000 monthly prize for best features about women in sport 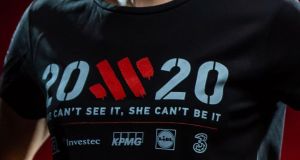 I get that 20x20 and Investec are only trying to enhance coverage and entice reporters to cover women in sport. Photograph: Morgan Treacy/Inpho

It is always a bizarre conversation when someone asks why I made the leap from studying criminals to pursuing a career as a sports journalist. I’m generally asked whether I am in it for the money or free match tickets. The answer is neither.

Most press boxes across Ireland leave a lot to be desired in terms of accessibility (at the home of hurling, Semple Stadium, to quote one journalist, you’d almost have to climb up the rafters, and he’s not carrying me on his back for matches). As for the money thing, I’ve been to enough conferences where I’ve been told by a guy who flew in on his private jet that money isn’t everything.

So, when I got the opportunity to write this column and was told it would be about women in sport, I had that look that happens when your taste buds have been over-zested with lemon. I took it, hearing my father in the back of my head saying “You’ll never know what leads to what”. I read some articles and columns and saw the themes that I should follow: rant a bit about resources and disparity, analyse stats and figures on said disparities and make the best of what you have. Being born with no limbs, you get used to making the best of what you have.

So I threw myself into it. I like football, I like soccer, I bluff about rugby, I lived with a wicket-keeper’s girlfriend and I knew two hockey girls and a few intercounty players from a past life of public speaking. I knew I was not going to be the single change. When I heard Rena Buckley at an event say that her dream would be to see the women’s game get the same treatment the men’s game gets, I saw a new angle.

A grand a month

You might know Niall Morgan’s shot percentage, the type of car Raheem Sterling drives or that Cork is losing that Corkness. But you probably don’t that Jenny Egan was canoeing in the womb, that Niamh McCarthy didn’t know what a discus was until she went to college, a few years before becoming a medallist and consistent medal hope for Ireland. You probably aren’t too aware that when the hockey team progressed through the World Cup, they almost had nowhere to stay and coach Graham Shaw had to bargain with Team Belgium to take their rooms.

When 20x20 and Investec launched a €1,000 monthly prize for the best feature about women in sport, I looked and thought, I could do with that. But, in all honesty, I can’t imagine doing an interview with a female athlete, winning the award and prize money and taking it all for me.

Not when young girls’ teams are crying out for basic gear, basic training facilities and just what every young person needs to excel in their sport. Basic gym equipment for clubs can cost almost €8,000. If your club wanted to buy a lawnmower and grass equipment, that could cost you anything from €2,500 to €50,000. And floodlights, a necessity for any outdoor pitch – a club near me recently spent up to €75,000. Even sand-based pitches are costing almost a quarter of a million.

A grand a month might seem relatively small beer when looking at those figures for facilities, but a little goes a long way. I get that 20x20 and Investec are only trying to enhance the coverage and entice reporters to cover women in sport. But knowing just how many clubs are struggling for basic equipment, would it not be wise to put the money back into a scheme for the actual clubs and athletes who are providing journalists with the stories?

Throughout the almost two years I have been writing this column, I have been on an adventure meeting new people, going to sports I never thought I’d see and getting wheelchair access to pitches I had never even heard of. When I got the whole idea for the column, I thought it would be my key to bigger things. Now, women in sport is the most exciting thing to be involved in.

My point is, it’s not a chore for me. I do it because I like it. I don’t need to be enticed by an award or additional money. The award would certainly look great on my mantelpiece, but I’d prefer to see my local club getting equipment for girls and playing a more significant part in developing the future than hyping myself up. Some 77 medals were won last year in Irish sport, 44 of those by a female athlete, while seven more went to mixed teams.

This didn’t happen because some journalist wrote a story. This didn’t happen by fluke. This happened because money was being spent on developing young female athletes. It was creating a generation of girls hungry and ready to go to win medals. And creating future front pages for journalists to fight over.