Sonia O’Sullivan: Too much, too soon, the downfall of many an aspiring athlete 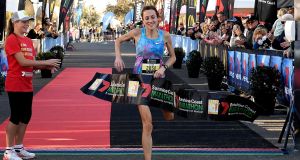 Sinead Diver: Mayo-born woman came late to athletics but has prospered and is now bound for the Olympics, competing for Australia. Photograph: Bradley Kanaris/Getty Images

It always fascinates me to see the number of young athletes that appear to succeed beyond expectations in the junior rankings, only to slowly and sometimes suddenly disappear off the sporting radar completely.

It’s one of those trends that we see year-on-year and nobody has really been able to pinpoint why or what it is that either slows or stops these athletes from ever reaching their perceived potential as senior athletes.

Last Sunday week at Stromlo Park in Canberra, 15-year-old Sarah Schiffmann won the under-20 cross country race at the Australian trials by 15 seconds, and will now lead the Australian junior women at the World Cross Country Championships in Aarhus, Denmark at the end March.

Schiffmann has been something of a revelation in Australian junior cross country running over the last six months, beginning with her surprise win in the Australian under-16 championships.

She also becomes the second youngest Australian athlete to be selected for the event. In 1983, when Sharon Dalton was also just 15, she also ran for Australia at the World Cross Country, only she never improved her times beyond her junior success.

That was 26 years ago, and in some ways little has changed in that time. Lots of underage athletes still post fast times and rarely go on to progress at the same rate as they leave the junior competitions, or when it really matters. Just because you’re good for your age doesn’t mean you’re going to see an athlete compete at the highest level on the world stage.

Still there have been a few exceptions: Zola Budd won the World Cross Country in 1985 and 1986, although maybe we never truly saw her fulfil her potential as a senior athlete.

In recent times we have all been taken in by the success of teenager Jakob Ingebrigtsen from Norway, her winning the European Championships 1,500m and 5,000m and competing with the best athletes in the world over 1,500m, with the fourth fastest time of the year in 2018.

It’s hard not to be in awe of these athletes and their prodigious talent. But to achieve these results they must also be working at a very high level, and this is where you have to ask the question. At what cost?

It’s not just the winning and losing of races. There are also the emotional factors involved when young athletes are exposed to such hard training regimes and unnatural progressions when their bodies are still growing and developing. When any athlete tastes success they want more, and the higher the stage you are competing on the greater the stakes and higher the risks.

Then you also have to weigh up if not now, when? If you hold back you may just never reach the great heights you are currently capable of, but there has to be some duty of care, especially from the coaches. It often seems like a case of short-term gain for long-term pain.

While I was training for the 2000 Sydney Olympics, back at my base in Melbourne, I was often joined by Georgie Clarke, a youth and junior world championship medallist over 800m and 1500m. She also ran at those Olympics age 16 then spent the next 12 years trying to get back to that same level.

As it turned out she never competed at the Olympics again. I remember thinking at the time and even mentioned why push so hard, but she had the added pressure of a home Olympics.

You could pick any country in the world and look down through the historical track statistics, I am most familiar with athletes from Ireland, Australia, and the UK, but there is no doubt it is a worldwide trend as parents encourage their children to take up sport from a young age, sometimes not just to be active fit and healthy, but at the first sign of success to push them towards a coach and more training.

I have always held the belief that children should develop naturally and gradually increase their training loads. Particularly with running, as it is such a high impact sport. If the core strength and stability is not first developed then there will be a lot of wear and tear on young bodies before they are fully developed.

There just always seems to be a rush to be good, to be faster all the time, never satisfied with race practice and ignoring the clock. Ultimately the most important thing is to win races. If this is not practised in a natural environment growing up then that piece of the jigsaw puzzle will always be missing.

You see it all the time – young athletes running in adult races trying to improve their time, when instead they should still be having fun and practising race tactics at their own age level. There also needs to be a purpose to a race, to engage the mental game and this can’t always be against the clock.

One of my favourite columns in the weekend newspaper is looking back at successful sports people, and once the years have passed on, an interview looking at where are they now.

What would be even more interesting would be to scan down through the long forgotten under-age athletes, championship record holders, from years back, and then ask: where are they now? These are the people that can provide the answers and help guide a better pathway for talented athletes to reach their true potential.

At the other end of the scale, you see an athlete like Mayo-born Sinead Diver who only took up running less than 10 years ago, age 33, and by chance too as she discovered over a few years that she was pretty good at running.

At the age when many international athletes are slowing down she found herself improving to a level where she is now competing in international races, running 68:55 for a half marathon in Japan last weekend, the fastest ever time for a woman over the age of 40.

She is now looking to make her first Olympic team, age 43 next year, only for Australia, after Athletics Ireland opted not to select her for the 2015 World Championship marathon in Beijing.

If you are a good athlete with the desire and motivation to train hard then there is time for everyone to commit and see what they can achieve at the stage in life that works for them. It takes the right environment and intelligent coaching. The more mature an athlete is the more likely they are to listen to their coach, listen to their body and make less mistakes.

The traditional path that puts life on hold to pursue an athletic career isn’t the only way, but still it is a huge commitment, maybe with more purpose and appreciation when older. There is also so much going on in a teenager’s life that a training schedule beyond their natural progression is only going to break down the body physically and mentally, and we need to be more patient.

There is more to success than fast times and winning races; you need to look at the overall picture of the athlete, what makes them tick, what drives them and what will keep them interested for a long steady period of development.

Running is a very narrow path to commit to early in life. It’s something we are all born to do but if you do too much, too young, you may never reach the pinnacle of success.