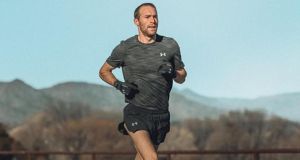 Stephen Scullion: “I feel like I’ve conquered the demons that used to hold me back, and I’ve got to keep going now until I can’t stretch any more improvement.”

Trouble can come at you from any direction in the marathon. Usually from behind. In Houston last Sunday, somewhere around mile 14, Stephen Scullion promptly realised he was running in the wrong direction. The warning shouts right there in front of him.

He jammed on his hamstrings, quickly backtracked, and rejoined the group of runners previously about 80 metres behind. The hamstrings never fully recovered but Scullion more or less did, defying the unseasonal cold and wind to finish in a personal best of 2:14:34 – the fastest marathon by any Irish man since 2011, and well on course to get him to next year’s Tokyo Olympics.

No big deal. Except minor detour aside, Scullion is convinced he can run faster, as well he might. Especially given just two years ago he was still smoking, well over his natural running weight and, by his own frank admission, getting pissed drunk every weekend, either on the couch, or ending up there.

Indeed now, just turned 30, he believes his running career is only getting going. Again.

He needs both hands to count the number of times he’s quit, only to discover some irresistible urge to start back. This time it’s for real.

There is nothing more common in any sport than wasted talent, and the realisation he was headed down the track, having held so much promise since his champion schoolboy days at Wellington College Belfast, slowly then suddenly sparked this reawakening.

The story of his run in Houston (10th overall, behind six East Africans, two Mexicans, and one American) isn’t anything special, only what does set it apart is Scullion’s rapturous telling of it, in every little detail.

On first request he told me to ring him “anytime”, which happened to be not long after he touched down in Dublin on Thursday morning, off a long-haul flight from Flagstaff, Arizona, his training base for the last two years, 5,000 miles from his home in Belfast.

From the go it’s also a wondrous monologue, Scullion recounting everything about where he’s come from, where he’s going, and his preference for hammering out the miles at 7,000-feet altitude rather than getting hammered drunk.

It’s refreshing – Scullion admitting he’d just £48 left in his bank account before flying home, asking his parents to transfer some money in case that was debited by the time he landed.

He’s trained himself in web development to help fund his comeback, works about 15 hours a week, only it’s clear he’s turned himself into one of the outliers of modern sport, or at least out there on the edge, and the only people who truly understand where that is are the ones who have gone over it.

“I feel like I’ve conquered the demons that used to hold me back, and I’ve got to keep going now until I can’t stretch any more improvement,” he says.

“And part of that was getting over myself, the spoiled kid who didn’t like to lose, but I think I’ve found a balance, to do what it takes to succeed, and maybe inspire a junior athlete somewhere down the road to not f*** it up for six or eight years.”

He’s evidence too that the best sporting stories are meant to entertain, maybe inspire, and if we are lucky, make some sort of lasting impression.

The death overnight on Thursday of Hugh McIlvanney brings another sad and lonesome reminder of that too, because these are worrying times for the sportswriter – access, or even any proper insight, continually being squeezed out to the point of near extinction.

Few of us will ever get to share moments like McIlvanney did throughout his almost 60 years of excellence, many of which are in recirculation as due tribute, including his 1974 interview with Muhammad Ali on the banks of the Zaire River, just hours after Ali beat George Foreman in the ‘Rumble in the Jungle’.

It’s all there, lasting details such as his household staff being asked to “fix two steaks and scramble about eight eggs” for Ali, while he’s “lying back on the thick cushions of an armchair in his villa, with the windows curtained against an angry sun that was threatening to evaporate the Zaire River as it slid like a grassy ocean past his front door . . .”

And that closing line – “maybe both he and boxing should quit while they are ahead” – still can’t be read without weeping.

These days, we’re often left weeping for other reasons, due to the strictly anodyne tone of the subject.

“For years, the task just seemed too difficult, I could never see past the weekend,” says Scullion, whose previous marathon best was 2:15:55, from London last April.

“Monday to Friday I was fine, but come Friday, with all my mates going out partying, I could never resist, and you’ll never make it if that’s where you’re at. If you’re going down the path of playing some rugby on a Saturday, then getting pissed for the next 24 hours, you’re not much of an inspiration to anyone, really.”

All of which already makes his road to Tokyo worth following – Scullion openly sharing by all means possible, including his own podcast.

Don’t stop, or turn back, you’re going the right way.