Ian O'Riordan: The alluring aloneness of the long-distance runner 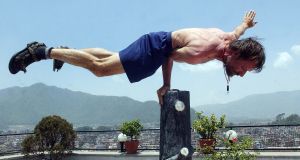 “Because when on a raw and frosty morning I get up at five o’clock and stand shivering my belly off on the stone floor... I feel like the first and last man on the world, both at once ... it makes me feel 50 times better than when I’m cooped up in that dormitory with 300 others . . .

“And as soon as I take that first flying leap out onto the frosty grass of an early morning when even the birds haven’t the heart to whistle... it’s a treat, being a long-distance runner, out in the world by yourself with not a soul to make you bad-tempered... sometimes I think that I’ve never been so free as during that couple of hours when I’m trotting up the path out of the gates...”

Pardon me if you’ve read this before, but something and everything about that passage comes around again each January – even 60 years after Alan Sillitoe first wrote it. His 1959 novella The Loneliness of The Long-Distance Runner, a mere 40-page spread within a collection of short stories, is still among the best examples of running literature, if only fleetingly capturing the pure essence and purpose of why people run.

It may also be one of the most misunderstood titles.

His is the story not of “loneliness” but “aloneness”, which Sillitoe suitably celebrates, like when first getting into the mind of his Borstal boy, Colin Smith.

On publication, The New York Times declared it “lusty and defiant”, and those words hold true today: the writing is certainly lusty – “as I run and see my smoky breath going out into the air as if I had ten cigars stuck in different parts of my body” – and the tone still utterly defiant, not just in how a simple distance run can help escape the trappings of the Essex Borstal life in the 1950s, but the trappings of society itself.

It holds true in other ways too, because now more than ever it seems the distance runner is going back to that nature, embracing the frosty grass and smoky breath, realising that for all the cheap thrills at our fingertips these days, the heart-rate monitors and tracking apps, all wrapped up in ear phones and compression socks, nothing beats the aloneness of the real thing.

Don’t just take my word for it.

How many people do you know have swapped the gym treadmill for a Saturday morning park run? And not just running; swimming, cycling or any properly outdoor sporting pursuit, even when embracing the cold of this time of year, if not yet at full blast.

The Economist ran a feature last month on why cold-water swimming is surging in popularity in the rivers, lakes and ponds around England. It is surging here too, and central to all this is rediscovering the importance and method of proper breathing.

No one will last long submerged in cold water if they forget to remember how to properly breathe, release the endorphins and adrenaline which come with it, the same with the distance runner out on those mornings when even the birds haven’t the heart to whistle.

Still it often takes some reminding.

“If there is one single physical factor on which success can be said to based, it is breathing,” wrote Percy Cerutty, the Australian distance running coach, in Success: In Sport and Life – the last of six books he wrote in the 1960s. Cerutty, who trained the great Australian milers Herb Elliott and John Landy, know what he was talking about.

He grew up in extreme poverty and didn’t taste any kind of fruit until he was 15. In 1942, at age 47, his health had failed so dramatically that he decided to do something dramatic about it. He revolutionised his diet, eating only raw, natural food, and embarked on a violent exercise regime, all based on proper breathing. Five years later, at aged 52, he ran a marathon in exactly three hours.

Success: In Sport and Life has five chapters dedicated to the art of proper breathing, what Cerutty termed Tidal Breathing, “the practice of complete respiration, the full use of both the upper and lower lobes of the lung”, as opposed to the more typical “zombeism” form associated with the sedentary lifestyle.

This was no breakthrough, influenced by the centuries-old Tibetan Buddhist technique in Tummo meditation, or the pranayama breathing of Kundalini in the Hindu tradition, and these days similarly practised and preached by Wim Hof, the Dutch extreme athlete better known as The Iceman. He also turns 60 this year, his Wim Hof Method of breathing now spreading fast among open water swimmers, plus a few distance runners, and probably coming to a yoga centre near you.

Hof also knows what he’s talking about, claiming 26 world records, including the longest ice bath (1 hour, 52 minutes and 42 seconds), and climbing to 23,600 feet altitude at Mount Everest, wearing nothing but shorts and shoes, only falling short of the summit due to a recurring foot injury. He did summit Mount Kilimanjaro, again wearing only shorts and shoes.

In a modified form of hyperventilation, the Wim Hof Method aims to super-aerate or oxygenate the blood and the body, ideally before any exercise, especially in the cold.

Eight years ago American investigative journalist Scott Carney set out to expose Hof as a charlatan, only to completely fall for his method, detailed in his book What Doesn’t Kill Us.

Hof also claims his super-oxygenating breathing method can suppress inflammation, boost the immune system – possibly alleviate depression. There is no proof of that, only experience, a question perhaps for the three-person panel discussion today (Saturday), as part of the First Fortnight festival, where Dublin footballer Shane Carthy is joined by distance runner Kevin Dooney and ironman triathlete Gerard Prendergast, outlining some of their mental health experiences specific to sport. It should be breathtaking.