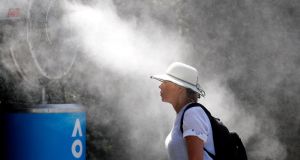 A fan stands near a fan to keep cool ahead of a match at the Australian Open tennis tournament in Melbourne. Photograph: Adnan Abidi/Reuters

It’s funny how quickly the body can forget one extreme in temperature to the other. Just over a week ago the highs around Melbourne were up close to 40C, only that fast becomes a distant memory when you’re caught out cycling in a torrential downpour, the temperatures quickly dropping back into low single digits.

That’s where I found myself last weekend. A planned group cycle had been reduced to a solo ride, overnight, once the weather forecast was not looking too favourable. When you know what cold and rain is really like in Ireland it’s hard to give in so easily, especially when I see the pictures coming in on the Cobh Triathlon WhatsApp training group. It’s still hard to imagine summer in Melbourne can also turn so cold and wintry so quickly.

At 7am it looked perfect: cool, dry and still. In my cycling jersey pockets I had lightweight gloves, arm warmers and a waterproof gilet. Plus an energy drink and some water; if only I’d known I could’ve saved myself carrying the extra liquid weight.

I made good time out to the base of the hills, just over an hour, then once on the planned route, I diverted a bit, up and over the ‘1 in 20’, to take in some early hills, down the crescent and up again through Perrins Creek, knowing there was a good chance I’d have to turn for home if the rain set in.

These are all very familiar routes for regular Melbourne cyclists. The ‘1 in 20’ is the perfect starting point. 6km of gradual incline perfectly smooth roads, meandering between the tall trees and ferns. I still haven’t worked out why it’s called the ‘1 in 20’. I used to think it was good to get up it inside 20 minutes, then overheard that the name was something to do with the gradient. No matter what, if you can ride up in under 20 minutes, then that’s a fair effort – until you realise that the fastest time up is just over 12 minutes.

The rolling Dandenong hills are popular with runners and cyclists, running along the forest trails and riding along the rolling roads, always quiet in the early morning before the tourists make their way out from the city.

It’s also a good place to escape when the temperatures are escalating in the city. Unusual for Melbourne, there were a few days in recent weeks when the mercury barely dipped below 30C overnight. It’s always a few degrees cooler in the hills, though you tend to notice this more in winter than in summer when descending at high speed and the biting wind easily finding a way through the lycra.

By the end of last weekend’s ride, my hands were so cold they could barely manage the brakes or the gears, and there was definitely an autumnal feel in the air. It was good practice and training, however, for the SRAC Atlantic Challenge around the Dingle Peninsula, on March 30th, when it’s possible we’ll get all four seasons in one day.

Some days last month were so hot during the Australian Open tennis that it put me off attending any of the matches. Still there were record attendances everyday through the gates of Melbourne Park tennis centre. It’s a bit like athletes training in the extreme heat; they just get on with it. Once they have made their minds up and a run is on the schedule, there’s never any doubt about heading out the door.

In Melbourne the weather forecast is often pretty accurate, always a build-up to an extreme temperature (the highest this year 43C), then a predicted cool change sweeping through, which can often drop the temperature by 20C in just half an hour. One of the reasons Melbourne is often referred to as the city with those four seasons in one day.

I’ve always thought the fitter an athlete is, the better they are able to train and compete no matter what the weather. You just learn to cope with the extremes, become more efficient with how to manage the core temperature, and also keep on top of fluid intake and absorption. You can only worry about what you can control and adapt to the ‘uncontrollables’ when faced with them.

I also noticed how all the tennis players at the Australian Open not only kept their drinks cool but had a selection of different concentration of electrolytes to get them through each match, and also to help with recovery, already looking ahead to the next match.

All these things are practised in training so when it comes to game day it’s just another version of normal something they have experienced before, and know how to deal with when faced with in a competition. The key is always to avoid any panic situations and be able to bring the body back to a normal equilibrium.

Preparation and planning is essential to help deal with extreme temperatures, high or low: if you have a plan of action then you feel like you are in control of the situation rather than letting the variables control you.

There were a few hot weeks in Melbourne where you had to look ahead and see when the really hot days aligned with a planned hard training session: Tuesday, Thursday and Saturday the main days that needed to be dealt with each week, when a bigger effort was required.

I was also more aware of that as I often had to drop my daughter Sophie to the training sessions in the morning during school holidays. One week I looked ahead and the Thursday was looking like the hottest day of the week, so I called up her coach, Tim O’Shaughnessy, to alert him that maybe he might need to check the temperature. Training is normally scheduled for 9.30am on Thursday’s, at the Caulfield racecourse, where you can run around the perimeter, against the outer fence, on well-watered lush grass.

Early morning in Melbourne is a bit like Ireland during a heat wave: 8.30am is still tolerable, but you can feel it heating up rapidly, so you’re happy to get through the training session before the heat takes over and the day becomes intolerable. There were other days when the best option was a swim in the sea, even if the beaches were crowded, the local streets and shops abandoned.

There is also one theory that training in extreme temperatures can be a bit like training at altitude; it’s harder on the body, so you find you may not be able to run as fast, but you get more benefit, and the perceived effort is greater.

This would apply to extreme heat or cold, and some comfort perhaps to anyone out cycling or running during these cold mornings in Ireland, knowing the effort will be so much easier come the summer.

1 Gordon D’Arcy: If Farrell can tap into our self-worth, we’re all on a winner
2 Winds of change as Ireland name a refreshed team, picked on form
3 Who is Caelan Doris? Meet Ireland’s newest rugby star
4 Sean O’Brien 4.0 - Leinster starlet ready for Under-20 debut
5 Nike Vaporflys won’t be banned but regulations will tighten
Real news has value SUBSCRIBE