Louise Quinn flying high as Arsenal go for a treble

From playing in Sweden to Notts County going bust, the Irish defender is now enjoying life 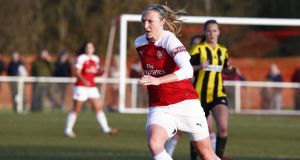 Louise Quinn in action for Arsenal: her side face Chelsea in the Women’s FA Cup fifth round on Sunday. Photograph: Action Foto Sport/NurPhoto via Getty Images

It was May 5th last year and Louise Quinn’s emotions took a rollercoaster trip. From the high of playing at Wembley in an FA Cup final in front of a record crowd of 45,423, to the low of her Arsenal side losing 3-1 to Chelsea on the day. She’d dreamed of the thrill of walking up those Wembley steps, but not to collect a runners-up medal. Bittersweet?

“It was, definitely,” she says, “but what I remember most is seeing my family and friends, all waving at me, as I walked up those steps, seeing how proud they were of me. That’s when I started getting more upset, but it kind of turned the moment for me too, from feeling devastated to just knowing I had made them proud being there.”

It had, after all, been a long and winding journey for the 28-year-old from Blessington, with plenty of bumps along the road, her family and friends knowing better than most just how hard she’d worked all the way through to be part of such a special day.

She had been gutsy enough to take on the challenge of leaving the relative comfort of the league at home to move to Sweden where she played with Eskilstuna for four seasons. The experience was, ultimately, enriching, personally and football-wise, but she had to battle homesickness and adapt to a very new culture. “They say the Swedes make the worst of strangers but the best of friends, they take a while to open up,” she says, but by the time she decided to move on, she had made friendships that will last forever.

Her ambition to play in the top flight in England appeared to have been realised when she was signed by Notts County, but she was left high and dry three months later when the club pulled the financial plug on its women’s team. Jobless and uncertain if she had any future in the game, it was her lowest point.

The fact that we have the chance of a treble is brilliant, every game between now and the end of the season means so much, and that’s where we want this club to be.

Now? “What happened almost feels like a blessing in disguise,” she laughs, Quinn now in the best place she’s ever been, a mainstay in the Arsenal defence and part of a side in contention for a domestic treble.

On Sunday it’s payback time, Arsenal taking on Chelsea in the fifth round of the FA Cup, and later in the month they’ll attempt to complete the first leg of that potential treble when they meet Manchester City in the League Cup final. And with just seven Super League games to go, it’s all in Arsenal’s hands, Quinn and co currently are two points adrift of leaders City but with two games in hand.

“The fact that we have the chance of a treble is brilliant, every game between now and the end of the season means so much, and that’s where we want this club to be. Because it’s a brilliant club. The facilities at our training ground are just fantastic, the pitches are better than the carpet in anyone’s living room, the gym is brilliant. We’re in there with the men’s team and the Academy lads, it’s all very normal, we’re one club. We’re going for dinner with Petr Cech in a few days, he’s a great supporter of ours. He knows your name when you meet him, even if you only had the odd chat before, he knows all of our results, our upcoming fixtures, he’s just a fan. He’s really, really lovely. And that’s the kind of atmosphere that is around the club.”

Having utterly dominated the women’s game in England, winning 11 league titles in the 12 seasons between 2001 and 2012, Arsenal were then usurped by Chelsea and City after both clubs began investing in their women’s teams, finishing third in the league behind them for the past three years.

They’re rising to that twin challenge, though, their squad is now packed with internationals from around the world, the Netherlands, Denmark, Sweden, Germany, France, Portugal, Switzerland and Austria all represented, as well the “home” countries. And along with Quinn, Katie McCabe is flying the Irish flag at the club, the Republic of Ireland captain in sparkling form too, finishing second in the vote for the latest Super League Player of the Month award.

“The club is getting back to where it wants to be,” says Quinn, “they definitely made that statement and showed their ambition by bringing in Joe Montemurro [the Australian who took over as coach in November 2017], he’s been brilliant, a great fit for us and a great fit for the club.”

“With the quality of players we have now, the competition for places is huge. But every day we’re training, I really run my feckin’ arse off, work my hardest, I try to give the coach no option but to put me on that pitch at the weekend. I made my 50th appearance recently and was so proud of that.”

“The English league is so good, the standard is just getting better and better. Chelsea and Birmingham aren’t far behind ourselves and City in the league, so it’s a genuine four-way battle for the title, which is so good for the game. And you have more clubs, like Manchester United and Tottenham, who are putting a lot in to their women’s teams now, both of them will probably be in the Super League soon, so it’s only going to get stronger and more competitive.”

For now, all the focus is on that cup game against Chelsea, a team Arsenal trounced 5-0 in the league back in October. Since then they’ve come good, beating Arsenal 2-1 when they met last month – one of only two defeats they’ve suffered all season, City also beating them in the league in December. Other than that, they’ve won 18 of their 20 games in all competitions.

“Chelsea have a team filled with quality players, so it was inevitable that they’d find that form after a slow start this season. It’s tough to get them so early in the competition, we’d love to have met them later down the line, but I can’t wait for it. These are just exciting times, so many big games, so much at stake. Yeah, this is where you want to be.”

1 Limerick roar from behind to sink Tipp and start league in style
2 Mike Catt hopes to have Irish backs purring in Six Nations
3 Six Nations: Ireland are contenders but England still the team to beat
4 Liam Cahill uses playing regrets to drive him as Waterford boss
5 GAA officials and referees brace themselves as new rules kick in, and this time it's for real
Real news has value SUBSCRIBE
Here is your handy guide to sport on television this week