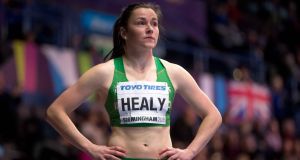 For the second January running, Phil Healy has begun her new year in a rather speedy fashion. Photograph: Morgan Treacy/Inpho

While most mere mortals take their time easing themselves in to a new year, Phil Healy is making a habit of being rather fast out of the blocks. Literally. For the second January running, the 24-year-old from Ballineen in West Cork has begun her new year in a rather speedy fashion, and for the second year running she is the winner of our January award.

Twelve months ago Healy announced herself on the international stage when she produced the run of her life in Vienna, knocking over a second off her personal best when she won the 400m in a time of 52.08 – a time that would have placed her fourth in the previous World Indoor Championships. She went on to have a memorable year, breaking the Irish 100m and 200m records, becoming the first to hold both Irish records in four decades.

After intensive winter training with her coach Shane McCormack in Waterford, there was a bit of deja vu about her latest trip to Austria, Healy again winning the 400m event at the Vienna International indoor meet in 52.31, this time finishing ahead of the Netherlands’ Lissane De Whitte, a bronze medallist in the distance at the 2018 European Championships, and Britain’s Eilidh Doyle, who won bronze at the 2018 World Indoor Championships.

And last weekend she maintained her form when she came from fourth at the bell to finish a close second to the US’s Jaide Stepter at the famed Millrose Games in New York in what was a tactical championship-type run.

Early days yet, there’s plenty more 2019 running to be done, but the Cork woman’s form suggests she might well be one to watch in the months ahead.

December: Mona McSharry (Swimming). The Sligo swimmer ended her 2018 in some style at the Irish Short-Course Championships in Lisburn, collecting six titles in the space of just three days – the 50, 100 and 200m freestyle, 100 and 200m individual medley and 100m breaststroke – as well as breaking six national records. The highlight for McSharry was the breaking of Michelle Smith’s 23-year-old 100m freestyle record which she lowered again in the final later in the same day.