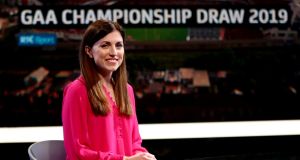 On the first League Sunday of the year, back in January, she took a pull on the reins a couple of times as Joe Brolly was in the process of going full Joe Brolly. Nothing overly adversarial, nothing pointed, just something she hasn’t done a thousand times before in her career. Brolly asked her at one point if she was going to argue with him over every little thing he said.

“If it requires an argument, yes,” she replied.

It actually looks rougher in print than it was on screen, where both of them were half-laughing the whole time. In the parlance of the times, however, the exchange blew up online.

GAA Twitter was aflame (as aflame as it can be on a January Sunday night), the various click factories around the place wrote pieces with the clip embedded and everyone knocked a half a day’s messing out of it.

Which was a half a day more than Cantwell imagined it had in it. Speaking on the Added Time podcast ahead of the start of the championship next weekend, she recalled the whole episode with bemusement.

“Honestly, the reaction to that, I was completely and utterly overwhelmed with. To me, that was a completely normal broadcast. I thought nothing of it. first one out of the way – great. I couldn’t get over the reaction. Because I’m on every Saturday afternoon for four hours on radio and we have these sort of things happen all the time. That was minor!

“It was actually the first time that I realised the magnitude of the programme. And I suppose I should have – it’s The Sunday Game. Well, this was League Sunday but it’s the same sort of thing, just for the league. but I was actually taken aback by that because it never entered my head for a second that anything had actually happened.”

Cantwell and programme editor Rory O’Neill came in for a special episode of Added Time podcast, available to all on Monday. The Sunday Game is heading into its 40th year on our screens and Cantwell follows Jim Carney, Seán Óg Ó Ceallacháin, Michael Lyster, Pat Spillane and Des Cahill into the presenter’s chair.

If there are nerves, they haven’t kicked in just yet. Come air time, though, they’ll make themselves known. They always do.

“You are so exposed when you are on TV,” Cantwell says.

“If everything goes wrong, it all comes down to you, the dopes who are sitting in front of a TV camera. I know it’s strange but that’s what gives you the bit of a buzz. I think it’s an arrogance really, let’s be perfectly honest about it. I think anyone who goes into a career in radio or TV, there has to be a bit of that in there.”

O’Neill has worked in RTÉ since the early-2000s and has been on The Sunday Game beat for most of that time. That the show is such a lightning rod for criticism is something he takes as a backhanded compliment. When people stop giving out about The Sunday Game, it will mean they’ve stopped caring about it.

Still, it must get exhausting. Everyone thinks their county gets a raw deal, everyone assumes the hoors above in RTÉ are against them. O’Neill is a Nemo Rangers clubman and has the accent and attitude to go along with it. You’d think that would be enough to shield him from any sustained Rebel army attacks. You’d think wrong.

“So I just put a tweet out via the Sunday Game account that Sunday, something like, ‘Hope all the Wexicans are tuning in – a marvellous weekend in camogie and hurling coming up on the show. Tune in at 9.30 tonight!’

“Now, if anyone knows me, they all know my allegiances wouldn’t necessarily be something you could call into dispute. Well the torrent of abuse that rained down from Cork people – it just came in in droves. ‘Typical RTÉ, anti-Cork, we knew it all along.’”

The Added Time podcast with Malachy Clerkin and Pat Nugent is available wherever you get your podcasts from 6am on Monday.