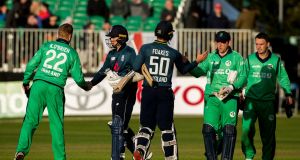 England kicked off their World Cup summer with a tense victory in Ireland, as Ben Foakes overshadowed fellow debutant Jofra Archer with a match-winning turn in Malahide.

Archer was easily the most hyped of the six first-timers on show, three in each side, but while he opened his international account with a stump-toppling yorker and regularly reached 90mph, England would have been heading home defeated were it not for Foakes’ cool-headed 61 not out.

Chasing 199, the visitors were reduced to 66 for five when the Surrey wicketkeeper calmed things down and began the painstaking process of reeling in the target and delivering a four-wicket win with three overs to spare.

Unlike Archer, Foakes’ chances of making the World Cup are slim, with the rested duo Jos Buttler and Jonny Bairstow untouchable among wicketkeeper-batsmen, but his contribution was easily the definitive one.

Foakes had already made a big intervention with a contentious stumping of Andrew Balbirnie that straddled a line between inspired, opportunistic and unchivalrous.

Nothing in the rules spoke against his belated flick of the bails as Balbirnie’s foot lifted and if anything it offered evidence of the Surrey gloveman’s razor-sharp instincts.

Play began two hours late due to a sodden outfield, with the contest reduced to 45 overs a side as a result. Ireland were still dismissed 11 balls ahead of time as Liam Plunkett and Tom Curran responded to Archer’s arrival by sharing seven wickets.

The pair are among the incumbents looking over the shoulder ahead but did their best to remind the selectors of their value, combining to restrict the hosts to what had seemed a gentle total.

Archer was selected for new-ball duty but failed to land a killer blow in an initial four-over burst. Paul Stirling proved a thorn in his side, taking the Sussex man for four boundaries, including a punch through point from Archer’s very first delivery.

He did not have long to wait to be involved in his first dismissal, though, stooping to catch Stirling as Curran made the breakthrough. England, and Archer, were off and running but Ireland were about to stumble from 55 without loss to 77 for four.

Plunkett, whose form has been patchy of late, prised out William Porterfield and Lorcan Tucker, while Curran needed a super take from Joe Denly to see off Kevin O’Brien.

The duo would be back later to wrap the innings up, but it was Archer’s return that captured the imagination. A rapid spell, littered with zippy bouncers, a clever slower ball and, crucially, a memorable wicket.

The target would not have shaken the away dressing room but without the chutzpah of rested openers Jason Roy and Bairstow, they started sedately.

England should have been able to absorb the loss of James Vince, brilliantly caught by George Dockrell off newcomer Josh Little, but relied on one of their two most established hands, Joe Root and Dubliner Eoin Morgan, to do the job. Instead the pair lasted just nine balls between them.

Root was pinned lbw in trademark fashion by Tim Murtagh, relentlessly accurate and searching for minor misjudgements, before Morgan bagged a three-ball duck. Little, the teenage left-armer, did brilliantly this time, digging one in short and brushing the glove as England’s Dublin-born captain found himself cramped for room.

The moment visibly energised the men in green, whose surge continued when Dawid Malan (24) became Little’s third victim. Struggling with a muscular injury and dropped once already he nibbled outside off stump and was held one-handed by keeper Gary Wilson.

Denly, earning a first one-day cap in a decade, managed a fleeting appearance before recreating Vince’s demise. There was another short ball, another full-blooded pull and another smart catch, with Boyd Rankin and O’Brien the winning combination on this occasion.

Foakes was at the crease by now and he would ultimately ride the tension to see England home.

There were scares along the way, notably when Ireland declined to review an lbw decision against him on 37. Had they done so, Murtagh would have been celebrating again.

After David Willey added 20, Curran (47 not out) joined Surrey team-mate Foakes and the pair chiselled away 98 runs between them, turning a nervy day into a safe result.