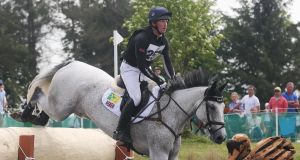 On Friday, the 36-year-old from Shropshire, who won the event in 2009, moved into second place when posting a penalty score of 21.1 on Ballaghmor Class, a 12-year-old by Courage on which he won Burghley in 2017. Following dressage, British riders filled the top eight places, Townend’s nearest challenger being local competitor Tom McEwan on Toledo De Kerser (24.7).

None of the six Irish riders competing at the event, which too is running with the new five-star status, finished inside the top 20 with the placed being England-based Padraig McCarthy (41), who is lying 22nd (31.2 penalties) on the British-bred Mr Chunky with which the Tipperary native made his Badminton debut last year before being a member of the Irish silver medal-winning team at the World Equestrian Games in September. Hillsborough maths teacher Clare Abbott (32) is two places behind on Cormac McKay’s home-bred 16-year-old ISH gelding Euro Prince (31.4) with which she is making her fifth Badminton appearance.

Irish eventing team manager Sally Corscadden commented of Saturday’s 33-fence cross-country track: “Eric Winter, designer of the cross-country course, describes this year’s track as being ‘different to what we’ve previously seen’ and different it certainly is. It’s an innovative track which is sure to test the athlete’s cross-country riding and I am very much looking forward to seeing how our Irish athletes will answer the questions being asked of them.”

Co Carlow’s Watson, who won the CCI4*-L at Ballindenisk last month on the Puissance gelding Imperial Sky (owned by his wife Hannah and Cathy Byrne), has moved up four places to seventh in the FEI world rankings.

This weekend, Ireland’s international show jumping riders are competing from Shangai in China to Tryon in North Carolina.

A large contingent of underage riders are in Fontainebleau, France where, on Friday, the James Kernan-managed quartet of Kate Derwin (Ahg Whiterock Cruise Down), Harry Allen (Quarisma Della Caccia), Jennifer Kuehnle (Consun) and Jason Foley (Uncas S) won the Junior Nations’ Cup competition. They finished on a two-round total of five with Belgium placing second (eight) ahead of France (12).

Kernan outlined how his team’s experience proved crucial and how the outing was very beneficial ahead of this year’s European Championships at Zuidwolde in The Netherlands.

“We came here with a very strong team - three previous European gold medal winners and one rider who has won European individual silver. That really came out today as all four riders jumped brilliantly which was even more impressive as some of our riders were on relatively new horses. We had some very strong riders left at home and it is all very positive for the future. We will go to Hagen next for the Nations’ Cup there and continue our preparations for the European Championships that take place in July.”

At the three-star show in Mannheim in Germany, the show jumpers have been joined by Irish dressage and para dressage competitors. At home, the weekend’s show at Portmore in Co Antrim features the second legs of The Underwriting Exchange National 1.40m Grand Prix (Saturday) and the TRM/HIS New Heights Champions Series 1.50m Grand Prix (Sunday).

This Bank Holiday weekend also sees RDS show jumping qualifiers taking place in Galway and Cavan while there is a national one-day event in Crecora on Sunday. Dressage fans of all ages are being well-catered for with the Irish Pony Club national dressage day taking place at Spruce Lodge, Co Wicklow on Saturday and the inaugural Wild Atlantic dressage festival running on Saturday and Sunday at the Ard Chuan Equestrian Centre, Co Sligo.

In the latest world dressage rankings published by the FEI, Germany-based Kildare native Judy Reynolds has gone up two places to 19th.