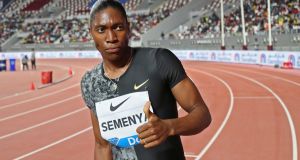 After an extraordinary week, a staggering performance. If this was Caster Semenya’s final race at 800m – or perhaps even the last race of her career, as some believe – this was some way to go out.

The South African Olympic champion did what she always does, slipping effortlessly on to the shoulder of her pacemaker before stretching out her rivals and then, halfway through the second lap, blasting them out of sight. The pace was a lightning quick 56.66sec through 400m, with only Burundi’s Francine Niyonsaba having the speed to go with Semenya. Yet she too was left flailing as the South African picked up speed to win by about 20 metres.

It was Semenya’s 30th consecutive victory over 800m – and one of her most dominant. The 28-year-old’s finishing time of 1 min 54.98 was the third fastest of her career and the 14th quickest of all time. Far, far, far behind her was Britain’s Lynsey Sharp who was ninth in 2:01:51.

Semenya celebrated by throwing her flowers into the crowd before poising for photographs with a big thumbs-up and smile. After all she has gone through this week, having lost her tribunal case at the court of arbitration for sport, it was reassuring to see her happy again. For now at least. Because Semenya knows that the Cas ruling means that athletes with differences in sex development (DSDs) – such as Semenya and Niyonsaba – will have to take medication to reduce their testosterone levels to five nmol/L for at least six months if they want to run internationally at events between 400m and a mile.

It means Semenya is facing three unpalatable options: take the medication and be around five to seven seconds slower over 800m; step up to the 5,000m without falling foul of the IAAF’s rules for DSD athletes; or walk away from the sport completely.

That was a prospect she appeared to raise on Thursday when she tweeted: “Knowing when to walk away is wisdom. Being able to is courage. Walking away with your head held high is dignity.”

However, Semenya told the BBC: “I’m never going anywhere. At the end of the day, it’s all about believing. It’s up to God. God has decided my career and he will end my career so no human can stop me from running. I understand there’s been a lot of controversy but that does not control anything.”

Britain’s Dina Asher-Smith started her 2019 campaign in impressive style by destroying a decent field in 22.26. Asher-Smith, who was the fastest woman over 200m last year, was far clear of second-placed Jamile Samuel who came home in 22.90.

In the men’s 200m Britain’s Nethaneel Mitchell-Blake made a stuttering start to his season as he finished in sixth place behind the reigning world and European champion Ramil Guliyev of Turkey. Mitchell-Blake, the European silver medallist last year, could only run a modest 20.83, well behind Guliyev, who crossed the line in 19.99.

The biggest performances of the day came from the 17-year-old Ukrainian Yaroslava Mahuchikh, who became the youngest ever woman to win a Diamond League event, clearing 1.96m to tie the under-17 record.

Meanwhile Jama Aden, the controversial coach who is under investigation for doping by Spanish police, has denied claims that he was at the root of last week’s extraordinary spat with Mo Farah and Haile Gebrselassie.

Gebrselassie had alleged that his row with Farah began when the British star took exception to Aden being refused entry to Gebrselassie’s hotel near Addis Ababa – a claim furiously denied by Farah.

What made Gebrselassie’s comments so incendiary was that he said it took place when he was Ethiopian Athletics Federation president between November 2016 and November 2018 – after Aden’s arrest during a major doping raid in Spain in June 2016.

However Aden insisted: “It is not true what Haile says. It is lies. I have not stayed at his hotel since 2012.”

Aden, who was called British Athletics an “unofficial facilitator” for Farah when he trained in Ethiopia in 2015, also denied ever training Mo Farah and said his last meeting with the British star was before the police raid.

“I did not train Mo Farah,” he added. “I don’t know why Haile says these things. The last contact I had with Mo was in 2016. I’m pissed off with all these stories. I haven’t had any contact with Haile.”