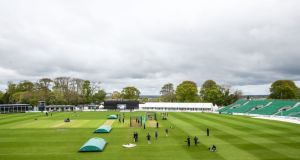 A view of the Ireland training session at Malahide ahead of the One-Day International against England on Friday. Photograph: James Crombie/Inpho

Ireland captain William Porterfield has revisited his criticisms of the slimmed down World Cup format and believes Celtic cousins Scotland are not getting a fair deal from cricket’s power-brokers.

Porterfield is a long-time opponent of the decision to reduce the number of participating nations at the sport’s flagship 50-over tournament to 10, four fewer than the previous edition, and will be a frustrated onlooker rather than an active participant this summer.

For England, Friday’s match in Malahide represents the start of their final preparations for the competition but for the hosts there is no such excitement on the horizon.

“It’s a gripe of mine, it’s always going to be a gripe when every other major sport is expanding their World Cup and expanding participation,” said Porterfield, the former Gloucestershire and Warwickshire batsman who is now back home with North West Warriors.

“You’ve got to have a pathway where anyone can progress.”

Ireland may still be sore about missing out on the World Cup but can at least console themselves with their recently acquired Test status and an expanded schedule that sees the West Indies, Bangladesh and Afghanistan follow England’s visit in the coming weeks.

Scotland, however, can expect slimmer pickings in the next few years, despite memorably beating England in a one-off contest at The Grange last summer and coming within one poor lbw decision of pipping the Windies to a World Cup spot.

And Porterfield is happy to act as an advocate having spent much of his career fighting for opportunities.

“I almost feel sorry for them in some ways, they had that game against England and what have they had since?” he said.

“They got two days of coverage and that’s it. You can harp on about growing cricket but Scotland have actually got a really good team and they need more fixtures to kick on.

“They’re just going to stagnate if they don’t get the backing and the fixtures. We have been fortunate in the way we’ve timed things and come through so we’re getting more fixtures now but from cricket’s point of view it’s sad if they get left behind when they’re in a good place to do something.”

Friday’s crowd at Malahide will witness Jofra Archer finally making his England debut, a player who will be hoping to replace months of speculation with tangible evidence of his international pedigree.

The 24-year-old paceman, Barbados born to an English father, only qualified under revised residency rules last month but has been the subject of excited anticipation for considerably longer.

A star of the global Twenty20 circuit, Archer was left out of England’s preliminary 15-man World Cup squad but has been handed a chance to audition for a place in the finalised panel.

He has a maximum of seven matches to make his case this month and England captain Eoin Morgan confirmed the Sussex seamer would be lining up in the first of those at Malahide, one of three first-timers in the XI.

“Jofra will make his debut alongside Ben Foakes and Dawid Malan,” said Morgan.

“He is exciting, I’ve played against him for quite a while now and everyone has probably seen what he has done around the world in T20 franchise cricket.

“The attributes and skills he has shown there are good enough to play international cricket, it’s how he deals with the pressures that come with it and how he performs.”

Morgan moved to draw a line under suggestions that Archer’s arrival on the scene so late in a four-year World Cup cycle could prove destabilising.

The likes of David Willey, Mark Wood and Chris Woakes have all spoken about the situation in recent weeks and are understood to be disappointed at how their words were received in certain quarters, but Morgan made it clear that there will always be a warm welcome for one more talented individual.

“It’s not an issue,” he said. “We’ve spoken about the quotes that came out and they were taken a little bit out of context. There’s no malice towards anybody coming in. Part of what we do is creating a healthy culture and an environment that is extremely welcoming and we’ve witnessed that over the weekend in the camp.

“I’m looking forward to him making his debut and Ben and Dawid as well.”

As for the latter pair, who have a chance to position themselves as first-choice injury replacements for the forthcoming tournament, the skipper added: “I play closely with Dawid at Middlesex and he has probably been unlucky that the squad has been so strong that he hasn’t played 50-overs earlier.

“The feedback on Ben has been absolutely awesome around the Test team and all the feedback from Surrey is that he’s one of the best keepers in the country and is an extremely composed middle order batsman that offers a lot.”